A fierce critic of Russia’s Putin found dead in UK 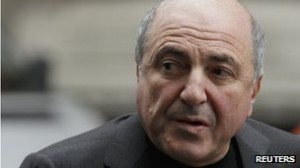 The exiled Russian tycoon Boris Berezovsky has been found dead at his home outside London.

A police investigation has been launched into the death of the 67-year-old – a wanted man in Russia, and an opponent of President Vladimir Putin.

A former Kremlin power-broker whose fortunes declined under Mr Putin, Mr Berezovsky emigrated to the UK in 2000.

Thames Valley Police said the death, at a property in Ascot, Berkshire, was being treated as unexplained.

The area around the property has been cordoned off to allow the investigation to take place, the force said.

The inquiry was at a very early stage and more details will be released when available, it added.

A South Central Ambulance Service spokeswoman said it had been called to the property at 15:18 GMT.

“We sent a number of ambulance officers and an ambulance to the address. The 67-year-old male was confirmed deceased at the scene,” she said.

Mr Berezovsky claimed he had been intimidated by Mr Abramovich into selling shares in Russian oil giant Sibneft for a “fraction of their true worth”.

The allegations were completely rejected by the London Commercial Court judge, who called Mr Berezovsky an “inherently unreliable” witness.

BBC world affairs reporter Richard Galpin said sources have told him that Mr Berezovsky was depressed after the loss of the court case and was under financial pressure.

The tycoon’s wealth is thought to have considerably diminished in recent years, leaving him struggling to pay debts in the wake of costly court cases.

Mr Berezovsky had made his fortune in the 1990s selling imported Mercedes as well as Russian-made cars.

He was one of the first Russian oligarchs – a tiny group of tycoons who at the end of communism used their connections to become rich almost overnight.

Mr Berezovsky survived numerous assassination attempts, including a bomb that decapitated his chauffeur.

During the later years of Yeltsin’s presidency, Mr Berezovsky was part of the leader’s inner circle as deputy secretary of Russia’s security council.

“Boris Berezovsky was one of the most powerful men in Russia back in the 1990s,” said the BBC’s Moscow correspondent, Steve Rosenberg.

“He rose from being a mathematician, a computer programmer and a used car salesman, to being such an influential figure in Boris Yeltsin’s Russia.”

He then played a role in Mr Putin’s rise in the late-1990s, before the new president moved to curb the political ambitions of Russia’s oligarchs.

But our correspondent said that on Saturday, a spokesman for Mr Putin said that Mr Berezovsky had sought the president’s permission to return to Russia.