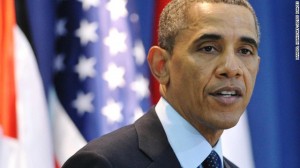 From the West Bank US president Barack Obama headed to Jerusalem to deliver the key speech of his Israel visit to the Israeli students at the Convention Center . In his speech he used the same basic arguments to advocate for a Palestinian state that he used in defense of Israel.

Obama’s speech to the Israeli students was briefly interrupted by a heckler.

“This is part of the lively debate that we talked about,” the president responded.

He joked: “We arranged for that because it makes me feel at home.”

He went on to support Israel’s right to defend itself and underline America’s commitment to the Iron dome missile defence system.

He described Hezbollah as a terrorist organisation, to loud applause.

Obama condemns the regime of Bashar al-Assad as one that would rather kill its own people than relinquish power.

No wall is high enough

So far Obama has talked up Israel’s history. Now he is addressing the frustrations Israelis feel with the peace process and is beginning to outline his position. From the prepared text:

I also know that not everyone in this hall will agree with what I have to say about peace. I recognize that there are those who are not simply skeptical about peace, but question its underlying premise, and that’s a part of democracy and the discourse between our two countries. But it is important to be open and honest with one another. Politically, given the strong bipartisan support for Israel in America, the easiest thing for me to do would be to put this issue aside, and express unconditional support for whatever Israel decides to do. But I want you to know that I speak to you as a friend who is deeply concerned and committed to your future, and I ask you to consider three points.

“First, peace is necessary… because no wall is high enough, and no Iron Dome is strong enough, to stop every enemy from inflicting harm.”

Strong and principled diplomacy is the best way to ensure that the Iranian government forsakes nuclear weapons. Peace is far more preferable to war, we have to do everything we can to resolve this diplomatically.

There remains time to pursue a diplomatic resolution. But Iran must know that this time is not unlimited. Iran must not get a nuclear weapon. This is not a danger that can be contained and, as president, I have said all options are on the table for achieving our objectives. America will do what it must to prevent a nuclear-armed Iran.

Obama goes off script, saying how the Palestinian youths he met earlier today weren’t any different than his kids, or those or ordinary Israelis. “I want them to have opportunities just like my kids do.” This gets heavy applause.

But the Palestinian people’s right to self-determination and justice must also be recognized.Put yourself in their shoes – look at the world through their eyes. It is not fair that a Palestinian child cannot grow up in a state of her own, and lives with the presence of a foreign army that controls the movements of her parents every single day. It is not just when settler violence against Palestinians goes unpunished. It is not right to prevent Palestinians from farming their lands; to restrict a student’s ability to move around the West Bank; or to displace Palestinian families from their home. Neither occupation nor expulsion is the answer. Just as Israelis built a state in their homeland, Palestinians have a right to be a free people in their own land.

“Israelis must recognize that continued settlement activity is counterproductive to the cause of peace, and that an independent Palestine must be viable – that real borders will have to be drawn.”