Another propaganda video by North Korea 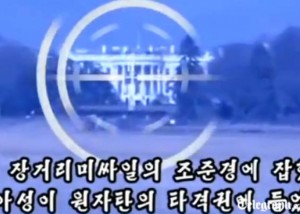 North Korea is taking aim at the U.S. with a new propaganda video showing the White House in its crosshairs and the Capitol dome in Washington being destroyed by a missile strike.

The video, titled “Firestorms Will Rain on the Headquarters of War,” was posted Monday on North Korea’s official YouTube channel, which serves as an online propaganda organ for the totalitarian regime.

In the opening scenes of the four-minute spot, images of American fighter jets and soldiers are shown over ominous music as a narrator warns of power-mad bullying Westerners, according to a translation by Britain’s Telegraph newspaper.

“The inner citadel is within our striking range of an atomic bomb,” the narrator says.

A triumphant score plays as cheesy graphics show the White House in a missile’s crosshairs and the Capitol dome exploding from a nuclear bomb strike.

“There is no limit to the range of our strategic rockets,” the narrator warns.

The latest propaganda video comes weeks after Pyongyang conducted a series of prohibited nuclear tests and threatened to engulf the U.S. in “a sea of fire.”

A video circulated last month appeared to show New York City under attack as Michael Jackson’s 1985 hit “We Are the World” played in the background.

Another portrayed President Obama and American troops going up in flames and claimed North Korea’s nuclear tests were spurred on by U.S. hostility.