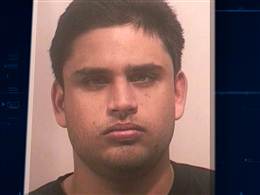 ORLANDO — A college student with two guns, hundreds of rounds of ammunition and a backpack filled with explosives pulled a dorm fire alarm Monday in an apparent attempt to force other students out into the open so that he could slaughter them, authorities said. But he instead put a bullet in his head as police closed in.

James Oliver Seevakumaran, 30, who once lived in Pinellas County, was found dead in his dorm room at the 51,000-student Orlando campus of the University of Central Florida. No one else was hurt.

“His time line got off,” university police Chief Richard Beary said. “We think the rapid response of law enforcement may have changed his ability to think quickly on his feet.”

Some 500 students were evacuated from the seven-story building in the middle of the night, unaware how narrowly they had escaped what could have been another Virginia Tech-style bloodbath.

“It could have been a very bad day here for everybody. All things considered, I think we were very blessed here,” Beary said. “Anybody armed with this type of weapon and ammunition could have hurt a lot of people here, particularly in a crowded area as people were evacuating.”

Seevakumaran spent at least some of his childhood in Pinellas County. On his Facebook page, he said he attended Seminole High School before going to UCF. He also said he worked as a cashier at a sushi restaurant in Orlando and wanted “to be a millionaire” by the time he turned 30. He also quotes Michelangelo: “Genius is eternal patience.”

In a strange post he made in December 2010, he says he is a “lazy genius” who thinks a lot about sex and is single. “The only time I’m not bored is in the shower,” he says in the post, which also notes that he once threw up on an old woman at a circus.

In May 1994, Seevakumaran was listed in a Times story about Pinellas students who were honored for excellence in various subjects as part of the school district’s Program to Recognize Initiative and Distinction in Education. The story says Seevakumaran was honored for his work in math while a student at Seminole Elementary School.

Seevakumaran had no criminal record in Pinellas County, though he was cited for traffic infractions three times between July 2001 and January 2002. He paid fines in each case.

Police shed no light on a motive for his planned attack. UCF spokesman Grant Heston said the school had been working to remove Seevakumaran from the dormitory because he hadn’t enrolled for the semester. Seevakumaran, who attended UCF from 2010 through the fall semester studying business, had never been seen by university counselors and had no disciplinary problems, Heston said.

The episode began early Monday, just after midnight, when Seevakumaran pulled a gun on one of his roommates, who holed up in a bathroom and called police, Beary said. Seevakumaran then pulled a fire alarm, apparently to get other students out in the open, the police chief said.

In his room, investigators found four makeshift explosive devices in a backpack, a .45-caliber handgun, a .22-caliber tactical rifle and a couple of hundred rounds of ammunition, police said. Beary said it appears his weapon and ammunition purchases began in February.

Antonio Whitehead, 21, said he heard the fire alarm go off and thought it was a routine event.

“All of a sudden, I felt the crowd move a little faster. And a police officer with a machine gun or something told everyone to start moving a lot faster,” he said.

Morning classes were canceled, but most campus operations resumed around noon.