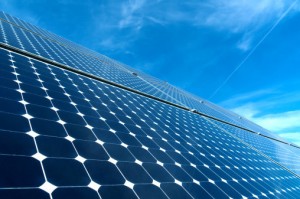 Abu Dhabi, the largest sheikhdom in the United Arab Emirates, is making a 10-fold boost in its capacity to generate electricity from the sun by starting the Shams 1 solar plant with partners Total SA (FP) and Abengoa SA. (ABG)

Countries in the Middle East and North Africa are developing sources of renewable energy to help satisfy the needs of growing populations and economies. Many of these states export oil and natural gas and are trying to cut their own demand for those fuels, which they use to produce power that governments generally sell at subsidized prices.

Abu Dhabi, which holds almost all the oil reserves in the U.A.E., seeks by 2020 to generate at least 7 percent of its power from renewable sources. It already operates a 10 megawatt solar facility at the Masdar City development and plans a 100 megawatt photovoltaic plant called Noor 1. It may build a 30- megawatt wind farm on Sir Bani Yas island in the emirate.

Neighboring Saudi Arabia, the world’s largest crude exporter, is seeking about $100 billion in solar investments to generate a third of its power, or about 41,000 megawatts, by 2032. The kingdom currently has about 3 megawatts of solar installations, trailing Egypt, Morocco, Tunisia,Algeria and the U.A.E., according to Bloomberg New Energy Finance.