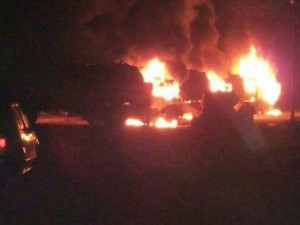 Three diesel tank trucks with Syrian tags that were supposed to transport diesel fuel to Syria were torched on Thursday in an old wheat market in the northern city of Tripoli, National News Agency reported.

“Seven tankers were attacked and their drivers were detained for a while before being released by the residents of the Bab al-Tabbaneh neighborhood,” AFP reported

One driver is still missing, a security source told AFP.

AFP added: “While three tankers were torched, the four others were dismantled by the residents”.

Radio Voice of Lebanon (100.5) reported late Thursday one of the diesel tank trucks exploded in Tripoli after being torched and black smoke is engulfing the city.”

“An Energa rocket fell between Jabal Mohsen and Bab al-Tabbaneh, amid reports of two wounded people and a tense situation in the area,” VOL added.

The protesters claim some diesel exported to Syria is being used by regime tanks against the rebels in the country’s two-year-old civil war that has killed nearly 70,000 people.

Nearly 1,000 tons of fuel are flowing each day from Lebanon to Syria as local traders worry about Lebanon becoming entangled by international sanctions against its war-torn neighbor, according to local reports.

The manager of Wardieh, a major fuel importer and retailer was quoted last February of saying that the “fuel exports to Syria are illegal under sanctions imposed by the United States and Europe”.

The current lebanese cabinet is dominated by the Iranian and Syrian backed Hezbollah militant group, which is backing the Syrian regime in its crackdown against the Syrian uprising, but Energy minister Gebran Bassil denied on Thursday any role for the government in these transactions and said the fuel is being sold and transported by private concerns.