Blast rocks Kabul during visit by US Defense chief Hagel 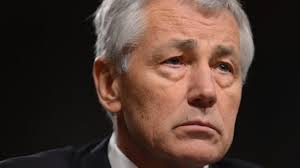 A suicide bomber blew himself up on the roadway outside the Afghan Defense Ministry in Kabul on Saturday, Afghan officials said.

At least 8 civilians were killed in the attack, and another six or seven wounded, according to Afghan officials. The attack took place during a visit by U.S. Defense Secretary Chuck Hagel, but he was in another part of Kabul during the attack.

The attack was followed by small-arms fire, a spokesman for Afghanistan’s NATO-led force, told Reuters. Other details remained vague, though Afghan officials believe it was one suicide attacker, either on foot or on a bicycle.

An International Security Assistance Force (ISAF) spokesman said Hagel was nowhere near the explosion. A defense official said Hagel “is in a safe and secure location” on an ISAF facility. All entry and exit points remained on lockdown there and no one was being allowed on or off the base.

“The Secretary was in a briefing when the incident occurred. The briefing continued as planned without interruption,” Pentagon spokesman George Little said.

The attack underscored the security challenges facing Afghanistan as U.S.-led NATO forces prepare to leave the country by the end of 2014.