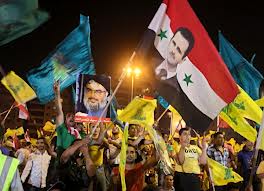 BEIRUT, Lebanon – As Syrian rebels appear to be making gains against the embattled regime of President Bashar Assad, the role of his Lebanese ally Hezbollah seems to be growing, heightening fears that Lebanon is being steadily dragged into the Syrian civil war.

As the conflict nears its third year, the Lebanese Shiites of Hezbollah are fighting Sunni rebels, including jihadists linked to al-Qaida, inside Syria.

This is being seen as the opening round in an eventual collision years in the making between Islam’s mainstream Sunni sect and the breakaway Shiites that will be fought in Syria and Lebanon.

With sectarian divisions in Lebanon sharpening by the day, with long-quiescent Sunnis increasingly antagonistic toward the Iranian-backed Shiites, the country’s largest sect and the most heavily armed, many fear it’s just a matter of time before there’s a major eruption of violence.

There are already flash points where fighting flares, most notably in northern Tripoli, where dozens of people have been killed, and in the northwestern border with Syria.

There, Hezbollah fighters have established a bridgehead in Syria and are clashing with rebels, mainly Sunnis from the Free Syrian Army, to help Assad’s regime dominated by the minority Alawite sect, an offshoot of Shiite Islam.

But tensions are also rising in the southern city of Sidon and in interface zones in Beirut.

Hundreds of hard-line Lebanese Sunnis are also in Syria, fighting for the rebels, their coreligionists.

Tensions have risen to the point that Hezbollah leader Hassan Nasrallah warned rival groups not to provoke his movement, which is more powerful than the Lebanese army.

“Don’t make any miscalculations with us,” he declared in televised speech Feb. 27 to those he alleged were seeking to trigger sectarian bloodshed — something he’s frequently accused of.

Some saw his warning as an indication of his concern that Hezbollah is being dragged into a war it doesn’t want but cannot avoid because its mentor Iran can’t afford to allow its only Arab ally, Assad, to be crushed.

A measure of Hezbollah’s growing participation in the Syrian war are the swelling accusations by Syrian rebels that Nasrallah’s battle-hardened and highly disciplined veterans of 20 years of fighting Israel are in action alongside Assad’s troops.

Nasrallah long denied Hezbollah was in Syria but the steady stream of dead fighters returned to their villages for burial after “fulfilling their jihadi duties” suggest a different story.

Now he concedes they’re fighting to protect a Lebanese Shiite enclave of some 30 villages inside Syria along the border. Fighting has been heavy in recent weeks and Hezbollah has shelled rebel positions inside Syria.

But the bottom line is that with Assad’s brutal regime fighting for survival, Hezbollah, a Syrian ally since its formation after Israel’s 1982 invasion of Lebanon, faces major problems if the regime collapses.

It would lose its vital overland supply route for arms, including missiles, from Iran and Syria. That would limit its capabilities against Israel and seriously undercut its long-held supremacy in Lebanon.

And, probably worst of all, a successor regime in Damascus led by Sunnis, who form the majority of Syria’s population of 24 million, would be only too happy to join their Lebanese co-religionists in seeking to eradicate Hezbollah, and Iranian influence, in the Levant.

It would be a fight to the death in a religious rupture that goes back to the early days of Islam and is spreading across the Middle East. Hezbollah, cut off from Iran, has nowhere to go.

Its growing deployment in Syria suggests Tehran’s dictating strategy for Assad and mobilizing its Lebanese allies.

“A Sunni-Shiite war is now no longer a scenario,” says Lebanese analyst Hanin Ghaddar. “It started when Hezbollah sent its fighters into Syria.”

It’s increasingly called on Hezbollah’s cadres to replace Assad’s military between Damascus and the Lebanese border so the troops can help defend the capital.

Meantime, Hezbollah’s deployment in Syria east of its Bekaa Valley stronghold in Lebanon is intended to maintain a military corridor with Zabadani, a major Hezbollah arms dump a few miles inside Syria, the city of Homs, and the strategic Qusayr region.