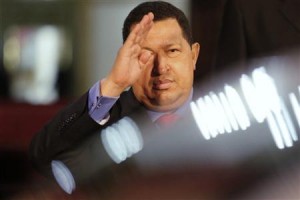 Venezuelan President Hugo Chavez has died after a two-year battle with cancer, ending the socialist leader’s 14-year rule of the South American country, Vice President Nicolas Maduro said in a televised speech….This is a headline news.

Earlier today Maduro said that Chavez was infected with cancer by “imperialist” enemies adding that the socialist leader was suffering his hardest moments since an operation three months ago.

Maduro’s accusations and grave prognosis came during a televised meeting of political and military leaders at the presidential palace amid speculation of an imminent end to Chavez’s 14-year rule.

“We have no doubt that commander Chavez was attacked with this illness,” Maduro said, repeating a charge first made by Chavez himself that the cancer was an attack by “imperialist” foes in the United States in league with domestic enemies.

“The old enemies of our fatherland looked for a way to harm his health,” Maduro said, comparing it with allegations that Palestinian leader Yasser Arafat, who died in 2004, may have been poisoned by Israeli agents.

Chavez has not been seen in public nor heard from since undergoing surgery in Cuba on Dec. 11, his fourth operation since the disease was detected in his pelvic area in mid-2011.

The government says Chavez’s breathing problems have worsened with a “severe” new respiratory infection, and that his condition is very delicate.

“These are the most difficult hours since his operation,” Maduro said, adding that doctors were with the 58-year-old president and that Venezuelans should unite in prayer for him.

The setback was devastating news for many of Chavez’s passionate supporters who have been praying for his recovery.

“There is so much sadness and confusion,” said one die-hard Chavez loyalist, Marisol Aponte, a community worker in the slums of Caracas, her voice choking with emotion. “But we must be strong and put into practice all he has taught us.”

Alleging a plethora of conspiracies from abroad and inside Venezuela, Maduro said the U.S. Embassy’s Air Force attaché was expelled from the country for allegedly trying to stir up a military plot against the government. A U.S. Defense Department spokesman identified him as Colonel David Delmonaco and said he was enroute to the United States.

“Our supreme responsibility is to keep telling our people the truth,” said Maduro, surrounded by grim-faced officials including Chavez’s elder brother Adan, a state governor.

Several dozen people gathered from early morning at the Catholic chapel in the military hospital where officials say Chavez has spent the last two weeks since returning from Cuba.

Some prayed aloud, while others wept quietly.

The government has repeatedly said Chavez is fighting for his life. Though short on medical details, officials have said he is breathing through a tracheal tube, unable to speak, and undergoing a new round of “high-impact” chemotherapy.

They are furious at speculation, particularly among pro-opposition media, that Chavez may already be dead.