GCC: Lebanon failing to abide by its disassociation policy 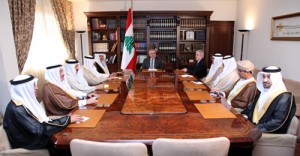 The Gulf Corporation Council (GCC) warned that Lebanon is not fully complying with its self-avowed disassociation policy toward the regional events and specially the Syrian conflict.

In a statement issued on Wednesday, the GCC announced that the council’s Secretary General, Abdul Latif Bin Rashid Al Zayani, met with Lebanese President Michel Suleiman in the presence of the ambassadors of the council’s 6 member states and delivered a letter to the Lebanese president on behalf of the Gulf group’s ministerial council.

The letter said that the “Gulf Corporation Council voiced its extreme concern [over Lebanon] not committing to the Baabda Declaration and the policy of disassociation.”

“The council,” the letter stated, “looks to [Lebanon] to abide by the policy in words and deeds in order to prevent placing Lebanon’s security and stability at risk or affect the interests of its people and their security.”

During the meeting, Suleiman reaffirmed his commitment to the government’s disassociation policy and told his visitors that every measure will be taken to ensure that the Lebanese parties abided by it.

The rival Lebanese leaders agreed during a National Dialogue session to adopt the so-called “Baabda Declaration,” which is aimed at distancing Lebanon from turmoil in the region, particularly the unrest in neighboring Syria.

The recent remarks on Bahrain by MP Michel Aoun, a member in the Hezbollah-led March 8 coalition were also not well received by the GCC

Aoun, in an interview with an Iranian television station last month, criticized the international community and the Arab League for its lack of support of Bahraini protesters, calling their predicament an “injustice.”

The GCC regarded Aoun’s comments as interference in the domestic affairs of Manama.