by yalibnan
424
US president has a historic opportunity to usher in a new era of relations with Latin America through rapprochement with Cuba and initiatives to curb gun and drug sales
Share: 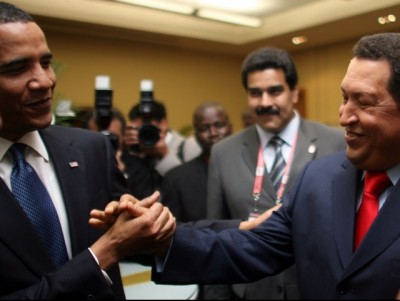 Hugo Chavez’s death furnishes Barack Obama with an opportunity to repair US ties with Venezuela, but also with other Latin American states whose relations with Washington were adversely affected by Chavez’s politics of polarisation and the Bush administration’s viscerally unintelligent reaction.

In particular, the change of leadership in Caracas could unlock the deadlock over Cuba, if the White House can summon the requisite political will.

Possibly anticipating a transition, Washington quietly engineered a diplomatic opening with Caracas last November after a lengthy standoff during which ambassadors were withdrawn.

“According to US officials, the Venezuelan vice-president offered to exchange ambassadors on the occasion of the beginning of President Barack Obama’s second term. Jacobson, in turn, is said to have proposed a step-by-step approach to improve bilateral relations, starting with greater co-operation in counter-narcotics, counter-terrorism and energy issues,” Andres Oppenheimer reported in the Miami Herald.

There is much ground to make up. “Relations between the United States and Venezuela have ranged from difficult to hostile since Chavez took office in 1999 and began to implement what he calls 21st-century socialism,” wrote a former US ambassador to Caracas, Charles Shapiro.

“Chavez blamed a failed 2002 coup against him on the United States [not true], nationalised US companies, insulted the president of the United States and blamed ‘the empire’ his term for the United States for every ill. In foreign affairs, the government actively supports the Al Assad regime in Syria, rejects sanctions on Iran and generally opposes the US at every turn.”

Despite such strains, economic self-interest always prevented a complete rupture. The US remained Venezuela’s most important trading partner throughout Chavez’s presidency, buying nearly half its oil exports. Caracas is the fourth largest supplier of oil to the US. In fact, the US imports more crude oil annually from Mexico and Venezuela than from the entire Arabian Gulf. This shared commerce now provides a formidable incentive and a launch platform for a fresh start.

Whether the opportunity is grasped depends partly on Maduro, a Chavez loyalist but a reputed pragmatist with close ties to Raul Castro in Cuba.

Yet it depends even more on Obama, whose first term, after a promising start, ended up perpetuating Washington’s historical neglect of Latin America. He now has a chance to do better.

The political climate seems propitious. Economic and cultural ties are also strengthening dramatically. Trade between the US and Latin America grew by 82 per cent between 1998 and 2009. In 2011 alone, exports and imports rose by a massive 20 per cent in both directions.

“We do three times more business with Latin America than with China and twice as much business with Colombia [as] with Russia,” an Obama official told Julia Sweig of the US Council on Foreign Relations.

Latinos now comprise 15 per cent of the US population; the US is the world’s second largest Spanish-speaking country (after Mexico).

Despite this convergence, high-level US strategic thinking about the region has continued to lag, Sweig argued.

“For the last two decades, US domestic politics have too often driven Washington’s Latin America agenda whether on issues of trade, immigration, drugs, guns or that perennial political albatross, Cuba, long driven by the supposedly crucial ‘Cuban vote’ in Florida,” she said.

Obama could change this dynamic if he tried and one way to do it would be to unpick the Cuban problem, which continues to colour the way Latin Americans view Washington.

“Having won nearly half of the Cuban American vote in Florida in 2012, a gain of 15 percentage points over 2008, Obama can move quickly on Cuba. If he were to do so, he would find a cautious but willing partner in Raul Castro, who needs rapprochement with Washington to advance his own reform agenda,” Sweig said.

A move by Obama to end travel restrictions and the trade embargo on Cuba would be applauded across the region, explode old stereotypes about gringo oppressors, and help build confidence with Venezuela, the Castro regime’s key backer, she suggested.

If Obama were to match a Cuban rapprochement with initiatives to curb US gun sales (a major concern for violence-plagued Mexico), reduce domestic demand for illegal drugs (a priority for Colombia), and settle on fair immigration rules, he would be well on the way to inaugurating a new era in political relations with Latin America.

It is a prize worthy of his second term. And in a roundabout way, it would be a fitting tribute to Chavez’s socialist revolution.