Thousands of tons of Golan Apples being shipped to Syria 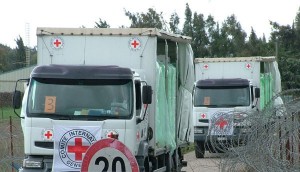 Thousands of tons of Golan Heights apples are being shipped to Syria through the Quneitra crossing under the Israeli Defense Forces( IDF) supervision and Red Cross coordination.

This is the first time since 2011 that apples are moved through the crossing. Next months 18,000 tons of apples from the Golan will be taken to Syria, with the approval of the Syrian government, according to Israeli and Syrian government reports .