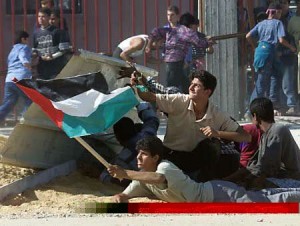 Israelis began the week trying to absorb some alarming news: “IDF Preparing for Third Intifadeh” was the headline in the country’s second-largest daily. “Riot Alert” roared the largest. A February weekend that in Israel had been notable only for its warm weather turned out to have produced a firestorm in the Occupied Territories after a Palestinian prisoner named Arafat Jaradat died in Israeli custody, and Palestinian officials blamed torture. Hundreds of Palestinians were in the streets throwing rocks and firebombs.

“All the events are clearly pointing in the same direction—we are approaching an Intifadeh,” a Palestinian official named Quaddura Fares was quoted as saying in Ma’ariv. The word “intifadeh” translates as uprising, literally “throwing off,” but it connotes much more: nearly 1,000 Israelis and more than 3,000 Palestinians died in the last one (which lasted from 2000 to 2005). “The prisoners on hunger strike and the tense protests, the violent events in which Palestinian civilians are killed and the freezing of the peace process all indicate that we are on the verge of an explosion,” said Fares, who heads the association dedicated to Palestinian prisoners. “Jaradat’s death may well be the spark that will ignite it.”

But that was Sunday. By Tuesday morning, the danger evidently had passed. Behind his desk in Ramallah, Fares lit a cigarette and told TIME: “I know 100 percent there is no Third Intifadeh.” How did he know? Israeli officials had peered into the abyss and agreed to release key Palestinian prisoners who had been held without charges. “The Israelis tell me they will be released 21 May,” Fares says. And that, apparently, was that.

But it’s not. The reality is the very mystery that spooked the Israeli press in the first place: There’s no switch to turn an intifadeh on or off. The uprisings really are like weather, formed by forces that defy forecasting and, once under way, are no easier to control. As Fares pointed out later in the interview, trying to describe the essential dynamic: “You’re not talking about an army that takes orders. You’re talking about a population.”

In that light, the week’s events had a certain coherence. But gleaning it requires understanding that Palestine‘s politics is as divided as its territory. The coastal Gaza Strip, home to 1.6 million Palestinians, is ruled by Hamas, a militant Islamist organization that preaches that the only way to achieve liberation from the Israeli occupation is by armed resistance. Palestinian Authority President Mahmoud Abbas, head of the secular Fatah faction that holds sway in the inland West Bank (pop. 2.5 million), argues precisely the opposite: That armed struggle is not only futile but counter-productive; it allows Israel’s powerful military to bring down the hammer and for outsiders to dismiss the Palestinians as terrorists.

Exhibit A, for Abbas, is the Second Intifadeh, the 2000-2005 uprising of suicide bombs and firefights that, by the time it petered out left the Palestinian economy in shambles and armed thugs holding sway where a government used to be. Abbas won a landslide victory on a platform of negotiating an Israeli withdrawal. “We tried to educate the Palestinian people after the Second Intifadeh not to use violence,” says Ziad Abu Ein, the deputy minister for detainees in Abbas’ government. “We try to do everything to push the peace process and stop the thought of an armed struggle.”

The approach has worked well, at least for Israelis. With Abbas’ security forces in firm control, and Israeli troops and intelligence operating freely, not one Israeli died in a terror attack on the West Bank last year. That had not happened since 1973, six years after the territory came under Israeli control in the Six-Day War. Israeli officials say they are extremely satisfied.

The problem is, Palestinians are not. Negotiations have been moribund for five years, while Israel expands the Jewish settlements that already bar Palestinians from 40% of the West Bank. Meanwhile, in Gaza, Hamas won visible concessions from Israel after the latest round of fighting. A year earlier it also won the release of 1,027 prisoners in exchange for a single Israeli soldier it had kidnapped.

Abbas’s most defiant move was a diplomatic one: He went to the United Nations, which voted to designate Palestine a (non-member) state. In response, Israeli Prime Minister Benjamin Netanyahu withheld tens of millions of tax revenues legally owed to the PA, undermining both Abbas and his approach. Notably, the money was suddenly released on Sunday, just as Israeli intelligence warned that the West Bank might be on the verge of exploding.

The lesson – that only violence really gets the Israelis’ attention — was not lost on Palestinian activists, even those who relentlessly preach non-violence. Mustafa Barghouti, a physician whose Palestinian National Initiative trains demonstrators to eschew rock-throwing in favor of more inventive protests, smiled in his Ramallah office at the power packed by even the rumor of a Third Intifadeh: “Yesterday I teased them a little bit, the Israeli media: I told them, ‘Okay, it started today.’’’

The fact is no one knows when it will start, if ever. The hardships of the last uprising remain fresh enough to inhibit many. But there is broad agreement the ingredients for a flare-up — chiefly, a lack of hope — are there. “Tension creates uprisings,” says Fatma Salame, 51, on a downtown Ramallah sidewalk. “It’s going to happen,” insists Arafat Hidmi, 48, from Hebron. “The situation does not feel stable at all.”

Consider the case of the 15-year-old boy shot in the chest during a protest just outside Ramallah on Sunday, near the Israeli military prison where most Palestinian prisoners are taken. Walid Hab al-Reeh turned out to be the son of the PA official in charge of “preventive security” — the very man whose job it is to keep things under control on the West Bank. That his son was in a confrontation with Israeli soldiers might be taken as an indication that the protest was sanctioned by the PA. But when I suggested as much both to officials and activists, their reaction was visceral. “No, that’s not true. The boy deceived his father; he took a taxi to the protest,” says Barghouti, whose medical aid group transported the wounded youth to the hospital. “No father sends his 15-year-old to a demonstration. But that tells you that even the man who’s in charge of internal security, even his son is interested in nationalist demonstrations. And that’s the dilemma that Fatah faces.”