90 % of Lebanon schools closed as Union goes on strike 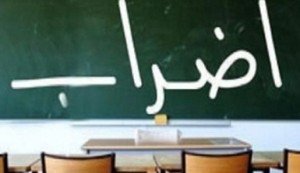 The Union Coordinating Committee’s central sit-in kicked off on Monday from the al-Sanayeh region in down town Beirut  toward the Lebanese Central Bank in Hamra, LBC reported.

For the second week disgruntled Lebanese public employees were expressing their outrage at the government’s delay in implementing a new system of wage increases.

The Monday protests were met with a heavy security deployment, especially in the capital Beirut where several government ministries were the targets of large gatherings of protesters.

Private Teachers Union leader Nehme Mahfoud told protesters that the UCC officials will hold a meeting later in the day to form committees to convince the schools that didn’t abide by the strike to close on Tuesday.

He hailed private school teachers that abided by the SCC’s strike, saying: “We are not thugs, we are teachers and we are keen to safeguard the country more than officials.”

Mahfoud reiterated that the procrastination of the government in referring the new wage scale to the parliament.

“This strike is targeted against the government and not school administrations.” Mahfoud stressed.

Earlier, Mahfoud told Voice of Lebanon radio (100.5) that 90 percent of public and private schools were closed on Monday.

He revealed that 27 demonstrations will be staged on Tuesday across Lebanon, pointing out that the central sit-in will be held on Wednesday simultaneously with a cabinet session.

The cabinet has been stalling in finding sources to fund the wages that were approved last year, leading to growing differences with the UCC, which has been accusing it of negligence.

However, the government argues that it is delaying the decision on the funding in an attempt to thoroughly discuss plans to boost the treasury’s revenue to cover the expenses of the salaries boost.

The state treasury will need more than $1.2 billion to cover the increase in wages

Elsewhere in the country, workers’ demonstrations were held in Tyre in South Lebanon, Zahle in the East, Byblos, Akkar and Koura.

On Monday, the government postponed its cabinet session set to debate the funding possibilities after it had approved the new system in early September 2012.