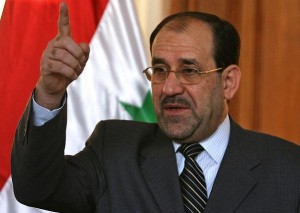 Despite denials the government of Prime Minister Nuri al-Maliki of smuggling arms to the regime of Syrian president Bashar al Assad regime, sources told the Future TV that militants in the Al Anbar province in western Iraq seized on Saturday after clashes with armed groups, a huge shipment of weapons which was en route to the Syrian regime.

It is not clear whether these arms are being supplied by Iraq or Iran.

According to a Western intelligence report obtained by Reuters last week , Iran has been using civilian aircraft flying over Iraqi airspace to ship tons of weapons and military personnel to Syria, aiding Assad’s effort to crush the rebel uprising against his government. The transfers have reportedly been organized by Iran’s Islamic Revolutionary Guard Corps. The report also reveals that Iran is “continuing to assist the regime in Damascus by sending trucks overland via Iraq” as well with the full knowledge of the Maliki regime.