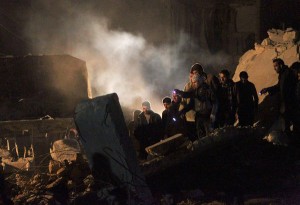 Beirut, Lebanon- Antigovernment activists in Syria said the military fired Scud missiles into at least three rebel-held districts of Aleppo on Friday, flattening dozens of houses, killing at least 12 civilians and burying perhaps dozens of others under piles of rubble.

The assertion, which appears to be corroborated by videos posted on the Internet, came one day after Syrian government targets in central Damascus were hit by multiple car bombings that were among the deadliest and most destructive so far in the nearly two-year-old conflict.

The report said the Hamra, Tariq al Bab and Hanano areas of Aleppo were hit with Scuds, which are not known for their accuracy; it was the second report this week of the military using such missiles on rebel-held areas in the northern city.

Aleppo, once Syria’s commercial capital, has become one of the focal points of rebellion in the uprising against President Bashar al-Assad. On Tuesday, according to activists in the city, a Syrian missile leveled part of Jabal Badro, another neighborhood controlled by the rebels. The Syrian Observatory for Human Rights, a Britain-based group with contacts inside Syria, said in a statement that the victims of missile explosions in Aleppo on Friday included children and that the number of victims “is expected to rise significantly because there are dozens of wounded under the rubble.”

Syria’s state-run news media made no immediate mention of the Aleppo attacks. The Web site of Syria’s official SANA news agency was dominated by the aftermath of the car bombings in Damascus on Thursday, which killed more than 70 people. The ferocity and scope of those bombings were unusual for central Damascus, which until now has been largely insulated from the carnage and destruction wrought by the conflict in the city’s outer suburbs and other parts of the country.

Most of the casualties in Damascus were caused by an especially powerful bomb near the headquarters of President Assad’s Baath Party and the Russian Embassy, which were both damaged, according to Russian news reports and witnesses contacted in the capital. SANA reported that a hospital and neighboring schools were also damaged.

No group has taken responsibility for the Damascus bombings, but the government has said they were carried out by terrorists, its generic description for the alliance of armed rebels seeking to oust Mr. Assad. The National Coalition of Syrian Revolutionary and Opposition Forces, the main Syrian group for the opposition, which was meeting in Cairo at the time, condemned the bombings, as did its Western supporters, including the United States.

Victoria Nuland, a State Department spokeswoman, told reporters on Thursday that the United States denounced such bombings as “indiscriminate acts of violence against civilians or against diplomatic facilities.” The attacks violate international law, she said, adding that “perpetrators on all sides have to be held accountable.”

Nonetheless, the bombings appeared to create a new source of diplomatic friction between the United States and Russia, which has supported the Syrian government during the conflict and has rejected any proposed solution that would force Mr. Assad to relinquish power.

Russia’s mission to the United Nations accused the United States of blocking its attempt to seek approval of a Security Council statement that would have condemned the Damascus bombings as terrorism. The United States mission denied the Russian accusation, saying it had requested only that the Russian statement include a paragraph that also condemned the Syrian government’s “continued, indiscriminate use of heavy weaponry against civilians.”

In a statement posted online Friday, Erin Pelton, a spokeswoman for the United States mission, said, “Unfortunately, if predictably, Russia rejected the U.S.-suggested language as ‘totally unacceptable’ and withdrew its draft statement.”

Other insurgency-related violence was reported by the Syrian Observatory and activists elsewhere in Syria on Friday, including random sniping attacks in the north-central city of Raqqa that killed four people during an antigovernment demonstration, and seven people killed near a mosque in Dara’a, the southern city where the anti-Assad uprising first began in March 2011.

The Local Coordination Committees, a network of anti-Assad activists, reported that fighters with the Free Syrian Army and other groups had taken control of at least two military facilities in the suburbs of Deir al-Zour, an eastern city that has been a battleground for many months. The report, which could not be corroborated, also claimed that rebels had gained control of a missile facility in Deir al-Zour that was formerly the site of a partly built nuclear reactor bombed by Israeli warplanes in 2007. Syria disclosed the existence of the missile facility four years ago at a technical meeting of the International Atomic Energy Agency.

Activists reached via Skype also reported what they described as rival demonstrations in the city of Kafr Nabl in northern Idlib Province, a rebel-held area, between a group calling for the establishment of an Islamic caliphate and a group seeking a secular state. The demonstrations appeared to reflect the influence of militant Islamist groups like the Al Nusra Front, which have been welcomed by some in the Syrian opposition for their brave fighting skills but are regarded warily by others. The United States has been reluctant to provide weapons to the Syrian insurgency partly because it considers Al Nusra a terrorist group, with links to Al Qaeda militants in neighboring Iraq.

In Idlib, what appeared to be a deepening sectarian divide caused by the conflict has taken the form of retaliatory kidnappings between rival Shiite and Sunni villages in recent weeks. The Syrian Observatory reported on Thursday, however, that scores of hostages had been released.

In Cairo, the Syrian opposition coalition concluded its two-day meeting Friday with an announcement that it would convene again in Istanbul on March 2 and begin forming a provisional government by naming a prime minister. Members hope that such a government can begin providing services in rebel-controlled territories and help prepare for a transition, predicated on the assumption that Mr. Assad leaves power.

The coalition also pulled back from recent statements by its leader, Sheik Ahmad Moaz al-Khatib, who had said he was open to talks with members of Mr. Assad’s government about a political solution to end the conflict.

“Bashar al-Assad and the security and military leadership responsible for the state of Syria today must step down and be considered outside this political process,” the coalition said in a statement after the meeting. “They cannot be part of any political solution for Syria and must be held accountable for their crimes.”

Photo: People gathered to search for survivors under rubble after what activists said was a Scud missile that was fired by the Syrian military hit in Aleppo’s Tariq al Bab neighborhood on Friday.