Qatar ready to pay ransom to free the Lebanese pilgrims 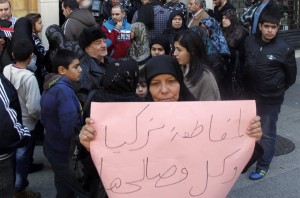 Qatar is ready to pay a $5 million ransom to free the Lebanese Shiite pilgrims that were kidnapped in Syria last May , An-Nahar daily reported on Friday.

General Security chief Abbas Ibrahim is reportedly following up closely on the controversial issue and has met with President Michel Suleiman three times in ten days after his visits to Qatar and Turkey in January.

Ibrahim briefed Suleiman on his talks with Turkish and Qatari authorities. And according to reports, Qatar has expressed readiness to pay a $5 million ransom to free the hostages held by rebels in the Aleppo town of Aazaz that lies near the Turkish border, according to the An Nahar report.

On May 22, 2012, dozens of Lebanese men and women were travelling by bus through Syria on their way back to Lebanon from a Shiite pilgrimage in Iran. After crossing the Turkish border into the Aleppo district, the bus was ambushed by around 30 armed men, who forced several of the passengers to dismount at gunpoint.

After removing 11 of the men, they instructed Hayat Awali, the woman leading the pilgrimage, to report the kidnapping at the nearest police station.

“They said they would hold the men hostage to exchange them for two Syrians currently in Syrian prison,” Awali told Al Jazeera. “They said because we are Shiites we can get Hezbollah to pressure the Syrian government.

“They never accused us of being members of Hezbollah, but just that we are from the same sect.”

Within hours of the news breaking, residents of Beirut’s southern suburbs took to the streets, burning tyres and blocking roads. Government officials and Hezbollah leader Hassan Nasrallah appealed for calm, asking all residents to go home.

After a flurry of diplomatic manoeuvres, information leaked out that the pilgrims would be released via Turkey, and that former Lebanese prime minister Saad Hariri had commissioned his private plane to fly them to Lebanese soil later the same day.

Dozens of government officials gathered at Beirut airport that day with the families, ready to give the pilgrims a jubilant welcome.

But between the official declaration of the pilgrims’ release and their “imminent” arrival in Lebanon, something went wrong. The kidnappers changed their mind.

In January, Prime Minister Najib Mikati headed to Turkey accompanied by an official Lebanese delegation, and asked Turkey to wield pressure on the Syrian kidnappers to release the nine remaining Lebanese hostages.

Two of the hostages were released in August and September.

While Qatar and Turkey back the revolution against Syrian President Bashar Assad, Hezbollah has been backing the Syrian regime. Tension between the rebels and Hezbollah has escalated since the week end and 3 Hezbollah members were reportedly killed by the rebels after they were attacked from Lebanon.

Photo: Families of the hostages protest in Beirut