IDS removes the posters that mock the Saudi King 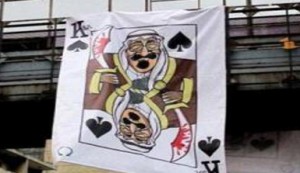 Lebanese internal security forces removed on Tuesday posters mocking Saudi King Abdullah in a move considered as a response to a cartoon published in a Saudi al-Watan newspaper on Maronite Patriarch Beshara al-Rai, according to LBC.

The posters that portrayed the Saudi King as the king of spades holding in his hand a sword stained with blood were seen pasted to the side of a pedestrian bridge in Jal al-Dib, Matn, early Tuesday.

Lebanon’s state prosecutor ordered Tuesday the arrest of individuals behind the distribution of the posters.

“Judge Hatem Madi tasked the Criminal Investigations Bureau to launch a probe to determine the identity of the individuals responsible for this act, locate them, arrest them and refer them to the judiciary,” according to LBC.

Al Watan’s carton depicting the Maronite Patriarch in a derogatory manner, replacing his miter with a rocket and highlighting the common letters between the patriarch and the Syrian president’s names in Arabic, ( Beshar) following his visit to Syria over the weekend, was published last Tuesday. The daily apologized the following day.

“This is a despicable act and is only a reflection of those who are responsible for it.”

“This does not represent the respectable principles and values of the brotherly Lebanese people,” the ambassador added.

He also said that the Saudi king’s stance toward Lebanon “represent his love for this dear country and its people.”