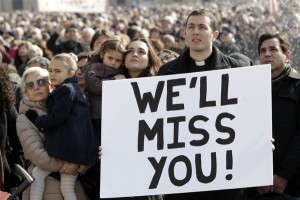 Pope Benedict asked the faithful to pray for him and for the next pope, addressing a crowded St. Peter’s Square in his penultimate Sunday address before becoming the first pontiff in centuries to resign.

The crowd chanted “Long live the pope!,” waved banners and broke into sustained applause as he spoke from his window. The 85-year-old Benedict, who will resign on February 28, thanked them in several languages.

Speaking in Spanish, he told the crowd which the Vatican said numbered more than 50,000: “I beg you to continue praying for me and for the next pope”.

It was not clear why the pope chose Spanish to make the only specific reference to his upcoming resignation in his Sunday address.

A number of cardinals have said they would be open to the possibility of a pope from the developing world, be it Latin America, Africa or Asia, as opposed to another from Europe, where the Church is crisis and polarized.

After his address, the pope retired into the Vatican’s Apostolic Palace for a scheduled, week-long spiritual retreat and will not make any more public appearances until next Sunday.

Speaking in Italian in part of his address about Lent, the period when Christians reflect on their failings and seek guidance in prayer, the pope spoke of the difficulty of making important decisions.

“In decisive moments of life, or, on closer inspection, at every moment in life, we are at a crossroads: do we want to follow the ‘I’ or God? The individual interest or the real good, that which is really good?” he said.

Since his shock announcement last Monday, the pope has said several times that he made the difficult decision to become the first pope in more than six centuries to resign for the good of the Church.

The pope has said his physical and spiritual forces are no longer strong enough to sustain him in the job of leading the world’s 1.2 billion Roman Catholics at a time of difficulties for the Church in a fast-changing world.

Benedict’s papacy was rocked by crises over the sex abuse of children by priests in Europe and the United States, most of which preceded his time in office but came to light during it.

His reign also saw Muslim anger after he compared Islam to violence. Jews were upset over his rehabilitation of a Holocaust denier. During a scandal over the Church’s business dealings, his butler was convicted of leaking his private papers.

People in the crowd said the pope was a shadow of the man he was when elected on April 19, 2005.

The Vatican has said the conclave to choose his successor could start earlier than originally expected, giving the Roman Catholic Church a new leader by mid-March.

Some 117 cardinals under the age of 80 will be eligible to enter the secretive conclave to elect Benedict’s successor. Church rules say the conclave has to start between 15 and 20 days after the papacy becomes vacant, which it will on February 28.

The pope will say one more Sunday noon prayer on February 24, hold a final general audience on February 27. The next day he will take a helicopter to the papal summer retreat at Castle Gandalf, south of Rome, flying into the history books.

Vatican officials said he would stay there for the two months or so needed to restore the convent inside the Vatican where he will live out his remaining years.

Photo: A priest displays a placard in St. Peter’s Square at the Vatican as he follows Pope Benedict XVI reciting the Angelus prayer from the window of his apartments, Sunday.