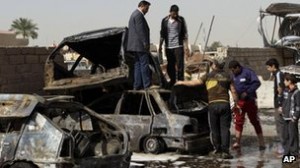 The attacks are reported to have targeted mainly Shiite areas in the city.

Security sources told the BBC three explosions rocked the neighbourhoods of Ourfally, Kiyara and Falah Street in the eastern suburb of Sadr City.

Sunni insurgents linked to al-Qaeda have been blamed for a recent spike in violence.

Some detonated near busy outdoor markets. The nearby al-Sadr hospital was full of wounded people.

One witness in Habibiya, Jumaa Kareem, told Reuters: “I was buying an air conditioner and suddenly there was an explosion. I threw myself on the ground. Minutes later I saw many people around, some of them dead, others wounded.”

Hussein Mohammed, who was wounded and saw his car destroyed in another blast, questioned how the bombers could get past security.

He told Agence France-Presse: “I spent about two hours to enter Sadr City, so how could this car bomb enter? Where is the security?”

No group has yet said it carried out the bombings.

Some reports put the death toll as high as 37.

Although sectarian violence has decreased in Iraq since the height of the insurgency in 2006 and 2007, attacks are still common.

Tensions have also been building up in the lead-up to parliamentary elections, due to be held in March.

On Saturday, the head of Iraq’s intelligence academy, Ali Aouni, and two bodyguards died in a suicide blast in the northern town of Tal Afar.

Gen Aouni is believed to be the second prominent Iraq figure to be murdered so far this year, after an opposition member of parliament was killed in the city of Falluja in the western province of Anbar.

Earlier this month, at least 33 people died and about 100 were injured in a spate of car bombings in predominantly Shiite areas of Iraq.