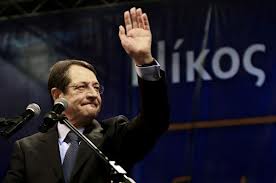 Right-wing leader Nicos Anastasiades has won the presidential election in Cyprus with 51 per cent of the vote, exit polls show.

Setting off chanting and honking of car horns by Disy supporters, the exit polls, with a margin of error of 1.5 per cent, showed former foreign minister George Lillikas coming in with 18 per cent.

The election was seen as one of the most crucial since independence, with Cypriots voting for a new president to rescue the recession-hit EU member state from bankruptcy.

Anastasiades had the backing of centre-right Diko party in the race for the presidency, which unlike in previous polls on the normally affluent but divided island focused on the economy rather than elusive efforts at reunification.

Anastasiades is seen as someone the European Union can do business with, while his stance on ending the division of Cyprus is more flexible than his rivals.

The most pressing task facing the next president as he starts a five-year term will be to agree terms with a troika of lenders on a bailout to save the island’s Greek-exposed banks and failing economy.

President Demetris Christofias sought a bailout in June, and talks dragged on as the outgoing leader, who did not stand for re-election, resisted measures including privatisation and reopened talks with Russia on a top-up loan.