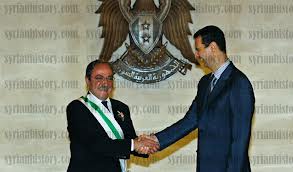 Residents of the northern Lebanese town of Kalamoun or Qalamoun headed to the villa where Syrian actor Douraid Lahham was filming a movie to protest against his presence in their town, LBC reported on Saturday

Lahham, a comedian who is known for supporting the Syrian regime of president Bashar al Assad was asked by the residents to leave the town.

The Lebanese Army later intervened and ushered Lahham out of Kalamoun.