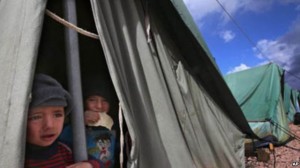 The Lebanese have been bitterly divided over the civil war in Syria since it started two years ago, but now they worry that the fighting next door will spread into their own country, upsetting its fragile ethnic and religious balance.

Above all Lebanese fear they will be dragged into the mayhem of neighboring Syria’s increasingly sectarian violence. Recent clashes between Lebanese army units and radical Islamists fighting to topple Syrian President Bashar al-Assad have only heightened their anxiety — as has a huge influx of Syrian refugees.

The government in Beirut has struggled for months to try to limit the repercussions from Syria.

The biggest worry has been that violence will be sparked between the Lebanese Shia militia, Hezbollah, which has been backing Assad, and the country’s Sunni Muslims, who support Sunnis in Syria fighting to oust Assad.

The latest alarm came from a recent clash in the town of Arsal near the Syrian border that left two Lebanese soldiers dead.

The incident between Lebanese army units and fighters affiliated with Jabhat al-Nusra, a Jihadist group that has emerged as a highly effective force within the Syrian rebellion, has prompted pledges of a crackdown from Lebanese army commanders.

“Any hand that aggresses the army will be cut off,” says army commander Jean Kahwagi. “We will pursue the attackers wherever they are,” he added. At the high-profile funerals of the soldiers, distraught relatives and mourners called for revenge.

According to Gen. Khawaja, the clash in Arsal came after Islamist fighters fired on an army patrol trying to hunt down a wanted Jihadist leader. But Lebanese Sunnis in the Arsal area say the fighting was a consequence of increased friction between the army and local residents, most of whom are Sunnis.

Khaled Daher, a member of the Lebanese parliament and critic of the government, says the army targets Sunni towns like Arsal because “they support Syrian rebels” and help Syrian refugees fleeing the war in Syria.

Lebanese officials say they have seen an alarming inflow of al-Nusra fighters who use Lebanon as a base where they can re-supply themselves. Officials also report an increase in foreign Islamist fighters transiting the country on their way to fight in the Syrian conflict.

The Lebanese army is under pressure to maintain control.

Lebanon and Syria share a complex web of sectarian ties and rivalries. Tensions are rising in the north of Lebanon and the army has had to step in more than half-a-dozen times to quash fighting in Tripoli between Lebanese Sunni gunmen loyal to the Syrian rebels and pro-Assad Alawites or Shiites.

Rival local leaders in Tripoli believe there is little chance to prevent further spillover from Syria’s civil war. They also say they are heavily involved in the Syrian conflict, supplying one side or the other with fighters, weapons and intelligence information.

“We play the same role that Peshawar did in the 1980s for the mujahedeen,” says Sheik Shadi Jebara, a Salafi leader in the Tripoli neighborhood of Bab al-Tabbinet, referring to the city in northwestern Pakistan that was used by mujahedeen rebels fighting the Soviet occupation of Afghanistan in the 1980s.

“The war in Syria is our war too,” he says. According to Sheik Shadi “more than 200 fighters” from Tripoli have crossed the border to fight Assad. He says the Tripoli’s Sunnis also have been supplying Syrian rebels with guns and ammunition and helping transport wounded rebel fighters to Tripoli for medical treatment.

For his part, Ali Mohammed Fadlallah, a spokesman in Tripoli for the predominantly Alawi Arab Democratic Party, says sectarian tensions have been inflamed by the “increasing presence of foreign Jihadists and Salafists in Lebanon.” He says the rebel Free Syrian Army has been infiltrating northern Lebanon. “The FSA has the potential to grow here and become more influential and destructive.”

The worst clashes in northern Lebanon occurred last autumn following the assassination of Brig. Gen. Wesson al-Hassan, the Lebanese security chief killed in a Beirut car bombing that many Lebanese suspect was ordered by Assad.

Earlier this month, a Lebanese judge issued an arrest warrant for one of President Assad’s top intelligence officials, accusing him of involvement in a bombing plot in Lebanon that was exposed by al-Hassan last August.

With sectarian tensions rising across Lebanon, former prime minister Sad Hariri has accused the government of Prime Minister Najib Mikati of making the security situation worse. Hariri says the government hasn’t done enough to seal the country’s borders with Syria to prevent arms smuggling and to prevent gunmen crossing back and forth.

Hezbollah, meanwhile, has increased its support of Assad and mounted more excursions across the border to fight Syrian rebels.

“The mood is fatalistic,” says a former government adviser. “We are pretty sure we’re going to get drawn further in but we don’t know when or how.

Photo: Syrian war refugees are also causing stress in Lebanon. The refugee camp shown here on January 7, 2013, is near the eastern town of Marj.