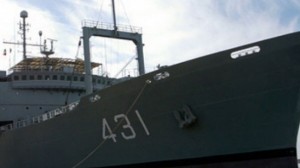 The case was raised at a UN Security Council meeting where UN special envoy Jamal Benomar called on the 15-member body to end “acts of obstruction” to the country’s democratic transition.

In a letter to the Security Council obtained by AFP, Yemen’s Foreign Minister Abu Bakr al-Qirbi said the shipment included “SAM-2 and SAM-3 surface-to-air missiles that had been handed over in Iran to eight Yemeni sailors for transport to Yemen.”

Qirbi asked in the letter for the government to be allowed to “participate” in the UN investigation.

Sanctions experts “will establish the facts on what happened, where the shipment came from, the recipients” and other details, Benomar told reporters after the meeting, without mentioning the accusations against Iran.

A Yemeni security official said in a recent interview that the weapons ship was headed for the Red Sea port of Al-Mukha and that the arms were intended for Shiite Huthi rebels.

The Yemeni coast guard, working with the US Navy, intercepted the ship in the Arabian Sea, according to the authorities.

An Iranian foreign ministry source, quoted by media in Tehran, has denied the country was involved in the shipment.

But Benomar said Yemen is “awash with arms.”

“Light weapons, heavy weapons are available to private citizens and groups,” some of whom are seeking to undermine efforts to form a government from elections scheduled to be held in one year, the envoy added.

Benomar said that “Yemen is at a critical point” as it heads toward elections that President Abdrabuh Mansur Hadi has vowed to hold in February 2014.

Hadi was elected a year ago under a deal that eased former president Ali Abdullah Saleh out of office after 33 years in power following months of deadly protests. Diplomats say Saleh and his associates are seeking to undermine the country’s transition.

The 2011 uprising wrecked Yemen’s already feeble economy and weakened government control over several areas, especially in the south and east.

The United States has staged several drone attacks on Al-Qaeda targets in the country.

A national dialogue on reform is scheduled to start on March 18 and Benomar said military reforms are underway.

“While progress has been made and the transition remains largely on track, it remains clear that there is active resistance to transition,” Benomar said, without naming any of the “spoiler” groups.

He said only that the Security Council had been told that “acts of obstruction are impeding the transition, and it is clear to whom these are attributable.”

“For the transition to succeed and the risk of further violence to be averted, we must remain attentive to the continuing attempts to obstruct the transition,” Benomar added.

Yemen needs the “clear support” of the Security Council, added the envoy, who has been praised for his efforts to help reach the deal under which Saleh stood down.

“The ball is in their court, they will need to act now, there is no time for complacency, time is running out and there will be no second chance,” Benomar added.