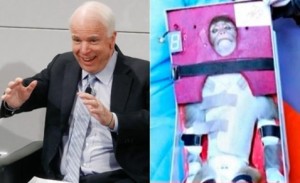 “So Ahmadinejad wants to be first Iranian in space – wasn’t he just there last week?” McCain said in a tweet that also linked to a story about Iran launching a monkey into space.

Some didn’t take so kindly to the not-so-diplomatic quip, prompting McCain, 76, to respond: “Re: Iran space tweet – lighten up folks, can’t everyone take a joke?”

“Maybe you should wisen up & not make racist jokes,” Amashtweeted.

Not everyone on the right agreed with Amash. Conservative John Podhoretz, for example, Tweeted this: “How dare McCain say something demeaning & disparaging abt the foremost anti-Semite on the planet.” And this: “So…it’s defend-the-Jew-hater-from-the-war-hero day.”

It’s not the first time McCain’s made a joke about Iran that landed him in some hot water. During his run for president in 2007, McCain sang about bombing the country.

“When veterans are together, veterans joke,” McCain said at the time. “And I was with veterans and we were joking. And if somebody can’t understand that, my answer is, ‘Please, get a life.’”