Suicide bombing at US Embassy entrance in Ankara kills 2 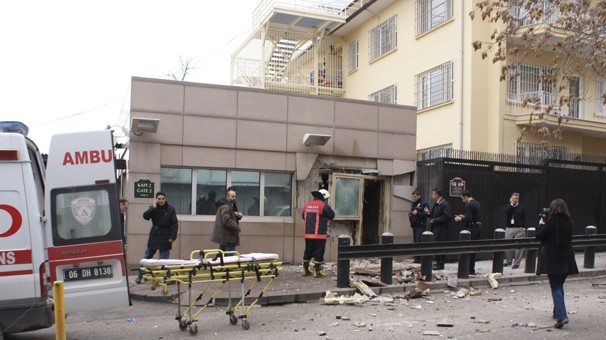 A suspected suicide bomber detonated an explosive Friday in front of the U.S. Embassy in Ankara, killing himself and a guard at the entrance gate, officials said.

U.S. Ambassador Francis Ricciardione told reporters that a Turkish citizen was also wounded in the 1:15 p.m. blast in the Turkish capital.

There was no immediate claim of responsibility, but both Kurdish rebels and Islamic militants are active in Turkey.

The bomb appeared to have exploded inside the security checkpoint at the side entrance to the embassy, but did not damage the inside of the embassy itself.

TV footage showed the embassy door blown off its hinges. The windows of nearby businesses were also shattered by the power of the blast, and debris littered the ground and across the road.

Police swarmed the area and immediately cordoned it off and several ambulances were dispatched.

An AP journalist saw one woman who appeared to be seriously injured being carried into an ambulance but a hospital official said she was “not in critical condition.” On its website, the Hurriyet newspaper identified the woman as Didem Tuncay, a television journalist who it said was at the embassy to get a U.S. visa.

The embassy building is heavily protected and located near several other embassies, including that of Germany and France. Hurriyet newspaper said staff at the embassy took shelter in “safe room” inside the compound soon after the explosion.

Phones were not being answered at the embassy later Friday.

Police examined security cameras around the embassy and identified two people who could have been the suicide bomber, a police official said, speaking on condition of anonymity in line with government rules.

In a statement, the U.S. Embassy thanked Turkey for “its solidarity and outrage over the incident.”

Kurdish rebels who are fighting for autonomy in the Kurdish-dominated southeast have dramatically stepped up attacks in Turkey over the last year. The United States considers the Kurdistan Workers Party, or PKK, a terrorist organization and has helped Turkey in its battle against the group. But the group has not attacked U.S. targets in its nearly 30-year insurgency.

In 2008, an attack blamed on al-Qaida-affiliated militants outside the U.S. Consulate in Istanbul left three assailants and three policemen dead.

Turkey is also being deeply affected by the brutal civil war in neighboring Syria, and has become a harsh critic of President Bashar Assad’s regime there. The war has left at least 60,000 people dead so far, according to the U.N., and Turkey is sheltering tens of thousands of Syrian refugees.

The first of six Patriot missile batteries being deployed to Turkey to protect the country against attack from Syria was just declared operational and placed under NATO command. Others are expected to become operational in the coming days.