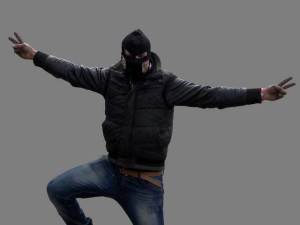 Four suspected members of the Black Bloc group have been arrested near the High Court in downtown Cairo Wednesday evening.

A Facebook page claiming to be aligned to the Black Bloc group has called on protesters to join Black Bloc members in front of the office of the general prosecutor in defiance of his order to arrest the group’s members.

On Tuesday, General Prosecutor Talaat Abdullah issued an order to arrest suspected members of the Black Bloc group, accusing them of being a terrorist group.

On Wednesday, Abdullah stated that members of the group would be arrested only if caught red handed in acts against the law.

Activists online have warned that arbitrary arrests are taking place in the area surrounding the High Court where the general prosecutor’s office is.

The same account also denied that those arrested were members of the Black Bloc, claiming instead they were regular protesters.

About the Black bloc

The Black bloc is a mysterious group of masked young men that has entered Egypt’s wave of political unrest.

They present themselves as the defenders of protesters opposed to the Islamist president’s rule.

They boast that they’re willing to use force to fight back against Islamists who have attacked protesters in the past — or against police who crack down on demonstrations. The youths with faces hidden under black masks have appeared among stone-throwing protesters in clashes with police around Egypt the past six days in the wave of political violence that has shaken the country.

During protests in Cairo on Monday, masked youths celebrated around a police armored vehicle in flames in the middle of Tahrir Square, making V-for-victory signs with their hands.

Their emergence has raised concerns even among fellow members of the opposition, who fear the group could spark Islamist retaliation or that it could be infiltrated to taint their movement. Islamist supporters of President Mohammed Morsi call the bloc a militia and have used it to depict the opposition as a violent force wrecking the nation.

Moreover, some Islamists have threatened to form vigilante groups in response, creating the potential for a spiral of violence between rival “militias.”

The bloc’s appearance comes amid increasing opposition frustration with Morsi, Egypt’s first freely elected president, and the Muslim Brotherhood and other Islamists who critics say have imposed a monopoly on power.

The anger has fueled the explosion of violence that at first centered on Friday’s second anniversary of the start of the uprising that ousted autocrat Hosni Mubarak. It accelerated with riots in the Suez Canal city of Port Said by youths furious over death sentences issued by a court against local soccer fans over a bloody stadium riot a year ago. Morsi has struggled to regain control, calling a state of emergency in three Suez Canal-area provinces.

The Black Bloc models itself after anarchist groups by the same name in Europe and the United States that have participated in antiglobalization and other protests over the past decade.

In Egypt, the group’s secrecy and self-professed dispersed structure make it difficult to determine its actual scope. It communicates mainly by online social media. Its members’ identities are unknown and faces unseen, so it’s impossible to confirm the authenticity of those who claim to speak in its name.

It’s even impossible to know whether every masked young man in the streets belongs to the bloc or is just a protester hiding his face — or if the distinction even matters. In Tahrir on Monday, vendors were selling black masks that young men crowded to buy.

“We are the Black Bloc . . . seeking people’s liberation, the fall of corruption and the toppling of the tyrant,” proclaimed a video announcing the group’s formation, posted online last Thursday. It showed youths dressed in black marching in lines in the Mediterranean city of Alexandria.

“We have arisen to confront the fascist tyrant regime of the Muslim Brotherhood with its military wing,” the video said, warning police not to interfere “or else we will respond without hesitation.”

Brotherhood officials, Islamist politicians and progovernment media accuse the group of violence ranging from trying to set fire to the presidential palace and attacking Brotherhood offices to ransacking state buildings, blocking train tracks and even exchanging gunfire with riot police.

The mayhem of the past six days has seen such incidents — but it is unclear what role Black Bloc members have had, or whether claims the group is armed are true. Security officials say they arrested one suspected bloc member carrying ammunition in Cairo on Sunday.

A university graduate named Sherif el-Sherafi said he was a founder of the group in an interview with the El-Watan newspaper — though his claims could not be independently confirmed.

He said the bloc has 10,000 members nationwide, organized into groups of around 20 each, but with no chain of command. Members are trained in self-defense and how to deal with tear gas.

“Violence is not an action but a reaction,” he said. He depicted the situation as an inevitable clash between the opposition and government. “What is coming is worse.”

Members say the group was created in response to Dec. 4 clashes, when Brotherhood supporters attacked a protest sit-in outside the presidential palace, touching off hours of street battles that left at least 10 dead and hundreds injured.

Many in the opposition saw that incident as a turning point, a sign that Islamists and the Brotherhood were willing to use violence against Morsi’s critics.

Monday night, a number of protesters praised the masked men in Tahrir Square.

“They aren’t here for sabotage or vandalism, but to protect us from Brotherhood militias,” said Ahmed Ali, an engineer.

Ali said police are now “suppressing the revolution on behalf of the murderer Morsi. . . . So we need these men to defend the revolution.”

Hossam al-Hamalawy, a prominent leftist activist, said the Black Bloc youth are “sincere, they want change and they have seen their friends get killed. . . . (So) they have decided to take the matter into their own hands.”

But he said it “could be dangerous for the revolution,” warning that “this could develop to people carrying arms” ostensibly in response to the Black Bloc.

“Those who topple the regime are the masses,” not underground groups, said al-Hamalawy, of the Socialist Revolutionaries, a key group behind the anti-Mubarak uprising.

Morsi’s office and the Brotherhood have contended for months that the opposition is using the streets to overturn results of elections that Islamists have consistently won.

Now they point to the Black Bloc as proof their opponents are willing to back violence.

On his Facebook page, Morsi’s assistant for foreign affairs, Essam el-Haddad, accused the Black Bloc of “systematic violence and organized crimes across the country” and accused the opposition of condoning it.

The Brotherhood in a statement denounced “groups of thugs, militias of black gangs” that it accused of attacks on state institutions, police and private property. “The silence of opposition political parties on such crimes . . . indicates their support.”