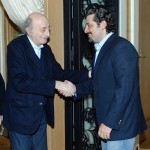 Jumblatt and Hariri “stressed the need to preserve the Taef constitution and religious coexistence in Lebanon which provide protection for national unity and stability in the face of these challenges,” according to a statement issued by Hariri’s office.

The two leaders also “discussed the regional developments and the challenges Lebanon is facing,” the statement added.

They also discussed the electoral law proposals and the positions declared by the major Lebanese political parties . The two national figures agreed “to pursue consultation on this matter in a way that serves the interest of Lebanon and the Lebanese.”

Jumblatt , who is on an official visit to France met yesterday with French President Francois Hollande . He was quoted following the meeting that he stressed the importance of preserving stability in Lebanon and safeguarding the country from Syria’s conflict.”