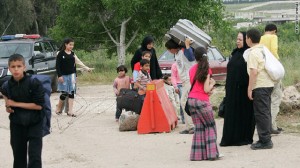 Beirut , Lebanon- Syrians left homeless or hungry by the country’s civil war face a massive shortfall in humanitarian aid as the United Nations struggles to raise money and the flight of refugees to neighbouring countries intensifies.

The UN is preparing to appeal urgently at a conference in Kuwait this week for donations to bridge a funding gap that stands at more than $1bn and is growing as numbers of displaced people swell more quickly than forecast.

In a sign of the increasingly desperate humanitarian situation facing Syrians this winter, Andrew Harper, Jordan representative of the UNHCR, the UN refugee agency, said new arrivals were crossing the border at about four times the rate anticipated.

“We’ve run out of money,” he said, explaining that his operation now had to take loans from headquarters to buy basic provisions such as mattresses.

In spite of new funding pledges by Britain and the US over the weekend, the UN has only a fraction of the funds it needs to tackle the humanitarian crisis unleashed by the Syrian conflict. By the middle of January, UNHCR and its partners had raised less than 3 per cent of the $1bn sought in an appeal launched last month to help the more than 670,000 Syrian refugees estimated to have fled to surrounding countries during the near two-year crisis.

UNHCR’s sister agency, the UN Office for the Co-ordination of Humanitarian Affairs, has raised less than 5 per cent of the $519m of aid it wants to channel into Syria during the first six months of this year.

Both agencies are likely to find their funding requirements increasing in a deepening crisis in which refugee numbers are expected to exceed the 1m originally estimated by the end of June.

Caroline Gluck, a spokesperson for Oxfam, the aid agency, said the Syrian crisis was “one of the worst we’ve seen in recent times”, adding that some refugees were even considering returning home because their living conditions were so bad.

Inside Syria, the UN estimates the number of people needing assistance has increased from 2.5m in last year to 4m now. In the biggest city of Aleppo, a battlezone for the past six months, the price of bread has climbed in some places more than 15-fold to 250 Syrian pounds ($3.50) a kilo, while it is estimated that half of public hospitals have been damaged by the conflict.

The UN is pinning its hopes on the oil-rich Gulf states taking the lead at Wednesday’s Kuwait fundraising conference, to which more than 60 heads of state have been invited. The UN’s humanitarian chief, Valerie Amos, arrived in Damascus on Sunday for a short visit ahead of the pledging conference.

But the reluctance of donors to give so far is not the only obstacle facing the UN’s fundraising efforts. Unocha has come under attack from Syrian opposition groups over its engagement with the regime of Bashar al-Assad, president, over the delivery of its planned $519m tranche of aid.

Avaaz, the international activist network, has condemned the Unocha plan as an “insane and immoral handout” to the Syrian government. It has called for donors to bypass the Kuwait conference and give money instead to the Syria opposition’s own relief efforts.

Unocha retorts that the criticism is unfounded and based on a fundamental misunderstanding of how it operates. It doesn’t give money to governments but channels it through partner organisations such as the Syrian Arab Red Crescent.

“We have to work with all parties in a conflict to be able to get the aid to where it’s needed,” said Unocha, which last month said it was stepping up its contacts with opposition members as part of its nationwide relief efforts.

Part of the problem seems to be presentational: a Unocha document referring to its role in “supporting the government of Syria’s efforts in providing humanitarian assistance” has enraged some activists, who point out how regime airstrikes and shelling are responsible for driving large numbers of people from their homes.

But the row has also tapped into tensions over what opposition figures say is a longstanding failure by governments and other international organisations to help people in areas targeted by the regime.