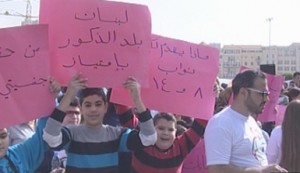 Lebanese activists held a demonstration on Sunday in Martyrs Square in downtown Beirut to protest the discrimination against Lebanese women over passing down their nationality to their children, LBC reported on Sunday

The protesters according to LBC criticized the Lebanese law that discriminates between genders and threatened of taking escalatory measures, including embarking on a hunger strike and boycotting official formalities until a just law is endorsed.