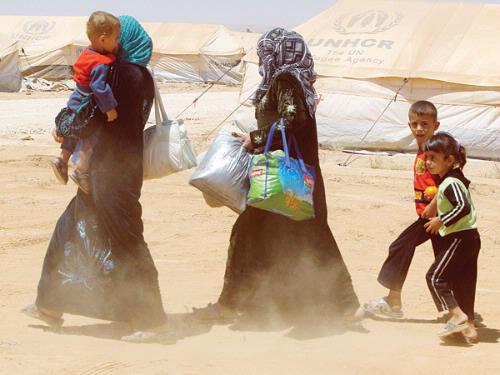 The number of Syrians fleeing to a Jordanian desert in the dead of the night continues to skyrocket as officials warn of dwindling resources and a prolonged humanitarian crisis.

A day earlier, nearly 3,000 refugees arrived in the nation, according to the United Nations High Commissioner for Refugees.

“Indicators show they keep coming and it’s much more than we’re used to,” Hmoud said.

They are fleeing the ongoing violence in Syria, where the United Nations estimates 60,000 people have died in nearly two years of fighting between government forces and rebels seeking to depose President Bashar al-Assad.

Violence continued in Syria on Friday, with three people killed in clashes nationwide, according to the opposition Local Coordination Committees. Heavy shelling continued in the Damascus suburbs, the group said.

And as more people take refuge from the upheaval, the escalating numbers are straining resources, officials said.

About 350,000 Syrian refugees have fled to Jordan since the conflict began, a number described as “staggering” by Jordanian Foreign Minister Nasser Judeh.

“The situation is now very volatile security wise. Parts of the country are changing hands at a very rapid basis,” said Valerie Amos, the U.N. emergency relief coordinator. “We are trying to get to as many people as we can because people cross the borders when they really reach a desperation stage, where they can’t get food, they can’t get medical supplies.”

About 700,000 Syrian refugees have left for neighboring nations since the conflict began, Amos said.

The International Rescue Committee has noted that in Jordan and other countries, a majority of Syrian refugees are living outside of camps — in cities and towns where social services, schools and even trash and waste systems are ill-equipped to meet the needs of a suddenly inflated population.

Amos urged donors to help, saying she hoped a Wednesday conference in Kuwait would yield some of the $1.5 billion in aid requested by humanitarian groups.

That money would help Syrians displaced within their own country and those who have fled to neighboring nations for six months, she said.

“If we do not receive these funds, we will not be able to reach the poorest and most vulnerable families who so desperately need our help,” she said.

Zaatari is in Jordan’s northern desert, northeast of Amman.

Enterprising Syrian refugees, many of whom arrived with nothing, have set up their own retail avenue amid dusty tents and prefabricated metal shelters. The facilities are providing a small source of income and — perhaps more importantly — something to do to stave off the boredom and discomfort of camp life.