State of Palestine placard at UNSC upsets Israel, US 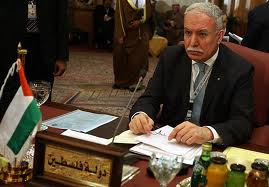 They were sitting in the Security Council Hall of the United Nations, but it was the International Criminal Court that may well have been on the minds of the delegation from the new non-member state of Palestine — and, more specifically, how to send representatives of Israel there, as defendants.

Wednesday was the first time since the Nov. 29 vote in the General Assembly recognizing Palestine as a de facto state that Palestinian Foreign Minister Riad Malki addressed the U.N. Security Council. This time, he had a plaque in front of him that read “State of Palestine.”

Malki took the moment to hint that the Palestinian territories would once again push to be recognized in the Security Council — a move they originally tried in September 2011 — but was blocked by the U.S. Malki also thanked the international community for its support during last year’s vote but said that “in spite of the strong message … the period after the vote has regrettably witnessed Israeli actions that are the complete antithesis of the two-state solution.

“The fact that Israel has never been held accountable for its crimes has fostered its impunity and emboldened its rejection of the path of peace,” Malki said, in a veiled threat to push for international prosecution of Israel.

The foreign minister also condemned Israeli plans to build settlements in the E1 section of the West Bank, east of Jerusalem, and said that Israel’s withholding of millions of shekels worth of tax revenues from the Palestinian Authority was “exacerbating the Palestinian financial crisis and compromising the function of our government.”

After the Security Council meeting, asked whether there was any concern if Palestinian actions in the ICC would be met with retaliatory actions on the Israeli side, Malki said he didn’t know but reiterated that Palestine has “refrained from taking any kind of action or taking advantage of what’s been offered to us by becoming a member state.” He said that Palestine was still waiting for Israel to come to the negotiating table and that “what Israel has done by announcing the construction of E1 settlements and others has trespassed the red lines, and we will wait to see how Israel will react.”

This was also the first time Israel had addressed the Security Council since the Nov. 29 vote, and both the U.S. and Israel representatives used part of their speaking time to remind those present that there is still no actual state of Palestine — and there will not be, if peace talks remain stalled as they currently are. Israel also said that it was waiting for the Palestinians to come back to the negotiating table.

In a barbed speech, Israeli Ambassador to the U.N. Ron Prosor said that since the vote on Palestinian statehood, Israel has not seen any gestures on the part of the Palestinians to return to the peace process.

Prosor also asked the Security Council why it continued to prioritize the question of Israel and Palestine over the problems of Syria, Hezbollah in Lebanon or al Qaeda.

“Today we see a far bleaker picture in much of the Middle East. Repression, instability and horrific violence continue to plague the region,” Prosor said. “I have a novel idea. Perhaps this discussion could occasionally spend some time examining why the situation in the Middle East remains unstable, undemocratic and violent. I’ll give you a hint: It has nothing to do with Israel.”

When Prosor was asked by a reporter about the Palestinian threat to bring Israel to the ICC, he said the only thing he was concerned about was bringing negotiations from New York back to Israel. “Jerusalem and Ramallah, Ramallah and Jerusalem,” Prosor said, referring to Israel and he Palestinian government in the West Bank. “Those two talking to each other — that’s the only way progress will be made.”