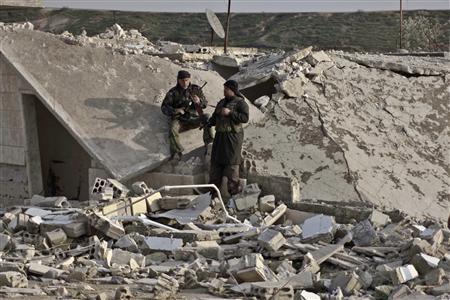 Syria’s civil war has ravaged vital infrastructure and halved output of staple crops, the United Nations said on Wednesday, as a 22-month conflict hardened by sectarian rivalry showed no sign of abating.

What began as a peaceful protest movement against President Bashar al-Assad has killed more than 60,000 people, devastated the economy and left 2.5 million people hungry.

Human Rights Watch on Wednesday pointed to the burning and looting of religious sites of minorities in recent months that suggested an escalation of sectarian strife.

As fighting raged throughout the country on Wednesday, Assad’s most powerful foreign backer Russia said the war would not be resolved peacefully as long as rebels insisted on the overthrow of Assad.

Agriculture is vital to the economy, accounting for roughly a fifth of gross domestic product before the war.

A U.N. assessment in Syria this month, coordinated with both Syria’s government and the opposition, found the conflict was destroying infrastructure and irrigation systems and that insecurity and fuel shortages were making it harder for farmers to harvest crops.

The devastation to farming could push the government to spend more money on imports, further straining the resources of a country that officials said was self-sufficient in wheat before the conflict.

“The mission was struck by the plight of the Syrian people whose capacity to cope is dramatically eroded by 22 months of crisis,” Dominique Burgeon, director of FAO’s Emergency and Rehabilitation Division, said in a statement.

“Destruction of infrastructure in all sectors is massive and it is clear that the longer the conflict lasts, the longer it will take to rehabilitate it,” he said.

Power cuts and fuel shortages have become part of daily life in the country and residents of central Damascus – which had been spared the worst fallout of the war – say basic services are breaking down.

Drivers in Damascus said there had been no petrol in the capital for two days.

A black market for fuel has developed in which traders charge roughly 20 percent more than government prices, residents said. Some also reported food shortages in the city centre.

Assad and his family, who have ruled the country for over four decades, belong to the minority Alawite sect, an offshoot of Shi’ite Islam. Syria is also home to Christians, Ismailis, Druze and other minorities.

New York-based Human Rights Watch pointed to a video published online in December that showed rebels waving assault rifles and cheering as a Shi’ite place of worship in the northern village of Zarzour burned in the background.

In the video, which Reuters cannot independently verify, one man announces the “destruction of the dens of the Shi’ites and Rafida,” a derogatory term used to describe Shi’ites.

Fighting there has killed more than 56 people over the last week as insurgents brought in heavy weapons including tanks and mortars to attack the Kurdish militants, the Britain-based Syrian Observatory for Human Rights said.

Russia – which has a naval base on Syria’s Mediterranean coast – said on Wednesday the conflict would not be resolved peacefully as long as Assad’s opponents were bent on his exit.

“Everything runs up against the opposition members’ obsession with the idea of the overthrow of the Assad regime. As long as this irreconcilable position remains in force, nothing good will happen, armed action will continue, people will die,” Foreign Minister Sergei Lavrov said at a news conference.

Moscow has vetoed three U.N. Security Council resolutions aimed to push Assad out or pressure him to end the bloodshed.

Russia flew 77 of its citizens fleeing the violence to Moscow via Lebanon on Wednesday but Lavrov said the situation in Syria did not require a mass evacuation of Russian citizens.

But one of the evacuees, Alfred Omar, a 57-year-old resident of Syria married to a Russian woman, said Russia’s policies had begun to threaten its own citizens inside the country.

“It’s dangerous there for Russians. If the Free Syrian Army understands that a person is Russian, they’ll immediately cut off their head, because they (are seen to) support Assad’s regime,” he said.

President Vladimir Putin told Lebanon’s visiting President Michel Suleiman on Wednesday that Moscow could offer financial and humanitarian aid to help Lebanon cope with 200,000 refugees who have crossed into his country from Syria.

Turkey has provided shelter for more than 150,000 Syrian refugees and has been one of Assad’s fiercest critics.

Ankara has asked NATO for help to beef up its air defences and the United States, Germany and the Netherlands are sending it Patriot anti-missile systems.

A senior NATO officer said on Wednesday the first Patriot batteries were expected to be in place and ready for use this weekend.