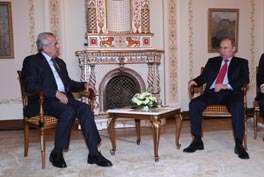 Lebanese President Michel Suleiman who is on an official 3 day visit to Russia, urged Russian President Vladimir Putin during their meeting on Wednesday to back calls for a global conference on helping Lebanon cope with Syrian refugee crisis

Putin reportedly told Suleiman that Russia could offer financial and humanitarian aid to help Lebanon cope, but no details were made available to the media.

According to media reports Putin offered to host a conference in Moscow on Syrian refugees.

Russia has been the main backer of the Syrian regime in its crackdown against the uprising that started in March 2011. Over 60, 000 Syrian have ben killed since the uprising began according to the UN