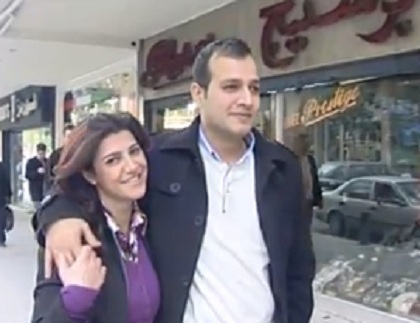 A Lebanese couple challenged the Lebanese sectarian  system and became the first  to have a  civil marriage inside the Lebanese territories , according to a report by LBC.

For Kholoud Sukkariyah and Nidal Darwish it wasn’t easy.   They  reportedly were required  to do the following paperwork:

1- Deleted the mention of their religious sects from their Lebanese IDs to prove before the law that they are not affiliated with any sect that forces them to marry before a religious court.  This gave them the right to hold a civil marriage in accordance with  Article 60 L.R.

2: Obtained  a form signed by the Mukhtar ( village  elected official)  proving that there are no objections to their marriage

3- Announced their intention to marry   15 days before the actual wedding date  ceremony to make sure that there were no objections to it. The announcement was supposed to be published in the Official Gazette or at least two newspapers, but in order to prevent any objections , they posted the announcement on the doors of their parents’ houses and on the door of their own house.

The key of course is  Decree No. 60 L.R.  which was adopted  in  1936 by the High Commissioner  during the French Mandate in Lebanon , which organizes and recognizes sects and grants them rights, said Lawyer Talal Husseini, who authored the draft. The decree says that those who are not affiliated with a sect are subject to the civil law of personal status, as well as to the introduction of the Constitution which adopts the Universal Declaration of Human Rights.

“Kholoud and Nidal’s marital contract was signed by the Notary Public and it was referred to Interior Minister Marwan Charbel who will look into its legitimacy,” LBCI  reported.

Lawyer and civil activist Munif Hamdan confirmed to MTV: “This marriage is legal and we only lack scientific and cultural courage to adopt civil marriages in Lebanon”.

“If the Ministry of Interior approves it, it would hence open  the door towards civil society and secularism in Lebanon,” Hamdan stressed.

Khouloud and Nidal are of course  still waiting for the Ministry of Interior to officially announce their marriage, but this beats going to Cyprus where most Lebanese couples go to get a civil marriage.