Russia Fails to Urge Syria’s Assad to Step Down 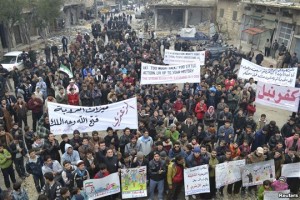 Russia is calling for a political transition process in Syria, but has stopped short of saying President Bashar al-Assad should relinquish power as part of a deal to end the country’s conflict.

In a statement Saturday, Russia’s Foreign Ministry reiterated Moscow’s long-held position that only Syrians can decide their future without outside interference.

The statement also called for the immediate end to the “violence and bloodshed” and for providing humanitarian aid to Syrians, including internally displaced people and refugees.

The statement follows talks Friday in Geneva between international envoy Lakhdar Brahimi and U.S. and Russian officials that ended without a breakthrough on how to end the civil war in Syria.

Brahimi said all sides underscored the need for a political solution, but he acknowledged that resolving the conflict soon is not likely.

The United States is among U.N. Security Council members that back a political transition plan for Syria that includes Assad stepping down from power. But Russia and China, both permanent members of the Security Council, oppose such a plan.

More than 60,000 people have been killed in nearly two years of fighting in Syria.

photo: Demonstrators hold banners during a protest against Syria’s President Bashar al-Assad, after Friday prayers in Kafranbel, near Idlib, Syria, January 11, 2013 in this picture provided by Shaam News Network.