angry Kurds rally in Paris over murder of 3 women activists 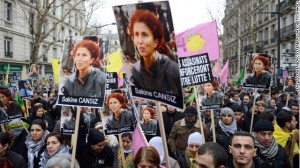 Officers are expected to arrest a number of people for throwing objects at police, he said. Security was also stepped up at the Turkish Embassy in Paris.

The French investigation into the slayings of the three Kurdish women — named by Turkish officials as Sakine Cansiz, Fidan Dogan and Leyla Soylemez — is ongoing.

Cansiz, the oldest of the three women murdered in the Paris offices of the Information Center for Kurdistan, was famous for being a co-founder of the Kurdistan Workers’ Party, or PKK. Turkey, the United States and the European Union label the PKK a terrorist organization.

There is still no clear evidence as to what lies behind the apparent assassinations.But many in Turkey fear that the triple murder could derail delicate peace talks between the Turkish government and the PKK, which launched a guerrilla war against the Turkish state nearly 30 years ago.

Kurdish activists have pointed the finger at possible Turkish involvement, while political leaders in Turkey have nodded to a possible feud within the PKK.

He also questioned why French President Francois Hollande had said the women were involved in talks with French officials.

“How can France hold talks with these people who are members of PKK that was also declared terrorist organization by the EU?” Erdogan is quoted as saying.

Turkey had contacted French authorities in November about the presence of Cansiz, he said. The activist was previously detained in Germany in 2007 but Turkey’s extradition request was not met, he added.

An autopsy Friday found that two of the women were killed by three gunshot wounds to the head and the third by four shots to the head, a spokeswoman for the Paris prosecutor’s office told CNN.

Erdogan had previously suggested the deaths “could be an internal settling of scores, or it could be an initiative that was taken to create an obstacle in the way of the new honest steps we are taking,” according to the Anatolian news agency.

But the PKK rejected suggestions that the killings were part of an internal feud.

In a statement published by the Firat News Agency, a pro-PKK web portal, the PKK’s Executive Committee blamed the murders on “international powers and the Turkish gladio.”

“Gladio” refers to alleged shadowy paramilitary groups accused of carrying out acts of political violence on behalf of the Turkish state.

“It is not possible for this bloody attack to be carried out in a central place like this without the support of international intelligence services and states,” the PKK added.

The Turkish government issued a security warning to Turkish diplomatic missions in France and throughout Europe.

Several hundred mostly Kurdish demonstrators gathered for a rain-soaked but peaceful protest in front of the French Consulate in Istanbul on Friday.

A Kurdish lawmaker told CNN that the bodies of all three Kurdish activists were expected to be sent from France to Turkey for funerals.

“This could be a bullet that is shot in the head of the peace talks,” said Sebahat Tuncel, a parliament member from the pro-Kurdish Peace and Democracy Party, speaking to CNN after Friday’s peaceful protest. But, she added, “we should not suspend a possible peace process.”

Kurdish activists accuse the Turkish government of decades of discriminatory policies against the country’s largest ethnic group. Turkish security forces have arrested thousands of Kurds in recent years on suspicion of terrorist activities.

Last fall, the Turkish government initiated a new attempt at dialogue with Ocalan. The PKK leader is serving a life sentence in a prison on the Turkish island of Imrali.

“We knew achieving peace would be difficult, we knew there would be provocations … we did not expect them to happen in France,” said Tuncel, the Kurdish lawmaker.

More than 40,000 people have been killed in one of the Middle East’s longest-running conflicts.

Photo: People hold posters of Sakine Cansiz, who was among three women found killed, during a demonstration Saturday in Paris.