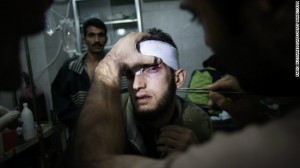 Syria accused the diplomat working to forge peace of an unfair tilt toward the enemies of Damascus, according to a state news report on Thursday.

Lakhdar Brahimi, the U.N. and Arab League special envoy to Syria, has “deviated from the essence of his mission and clearly unveiled his bias to circles known for conspiring against Syria and the interests of the Syrian people who have not read the political program for solving crisis objectively,” the report said.

The state-run Syrian Arab News Agency, a government mouthpiece, quoted an official source at the Foreign and Expatriates Ministry.

Syria’s remarks come after the BBC interviewed Brahimi, who has been trying to persuade the government and rebels to cease hostilities, urge world powers to move along a political settlement, and end a civil war that has left more than 60,000 people dead.

Brahimi told BBC that President Bashar al-Assad told him last month that “he was thinking of taking a new initiative.” Brahimi was quoted as saying he told al-Assad that “it would have to be different from initiatives in the past … which had not changed the situation one iota.”

But, Brahimi said, “what has been said this time is not really different. It is perhaps even more sectarian, more one-sided.”

In a public address on Sunday, al-Assad laid out a plan for a solution to the crisis, which he said should start with regional countries ending their support for “terrorists.” The government frequently uses that term to describe dissidents.

It includes a national dialogue as well as the drawing of a new constitution that would be put up for a public referendum. A major caveat to the plan: Al-Assad said he will not deal with “terrorists.”

BBC said Brahimi confirmed reports that al-Assad told him he was considering a run for president next year. Al-Assad and his late father, Hafez, before him have run Syria for decades.

“I think what people are saying is, a family ruling for 40 years is a little bit too long,” he said.

The international community is talking about the need for a government transition. Brahimi said al-Assad uses the word, “but whether he means the transition that is needed is uncertain.”

The Syrian source said Damascus “expected the U.N. envoy to read and analyze the political program for solving the crisis which we provided his office in Damascus with a copy of, as the only way out of the crisis, for it is based on the comprehensive dialogue among all elements of the Syrian society to agree on a national pact to be put to referendum and charts the political, economic and judicial system of Syria on democratic pluralistic bases.”

Top British diplomat: “All options are on the table”

British Foreign Secretary William Hague told the House of Commons on Thursday that the country will ramp up its help for the opposition in an effort to achieve a political transition.

But he said that “all options are on the table.”

“This is our approach: intensifying our efforts to forge agreement at the U.N., pursing a political transition on the ground while ruling out no option to save lives if the situation deteriorates, supporting the opposition and the Syrian people, increasing the pressure on the regime and being prepared to do so in new ways if necessary, working to deter human rights violations and abuses, and planning to help Syria get back on its feet once the conflict comes to an end,” he said.

The conference will address the funding gaps for the Syria Regional Response Plan and the Syria Humanitarian Response Plan, which together seek $1.5 billion to help Syrian refugees as well as those afflicted inside the country, said the U.N. Office for the Coordination of Humanitarian Affairs.

Most of the money sought would help support the more than 540,000 refugees who have fled to Jordan, Iraq, Lebanon, Turkey and Egypt. Many of those refugees areenduring frigid conditions in tents as a winter storm pounds the Middle East.

Meanwhile, the aid group Medecins sans Frontieres says that people seriously wounded in bombings and other fighting have a dwindling number of places to get help. The group detailed the work of one of its teams that traveled to the northern city of Idlib, which has been attacked repeatedly by government forces.

Another ballistic missile launched inside Syria

“The use of such indiscriminate weapons shows utter disregard for the lives of the Syrian people,” NATO said in a statement. “It is reckless and we condemn it.”

The crisis started in March 2011, when peaceful protesters demanding democracy and reforms were met by a fierce government crackdown, which spiraled into an armed opposition movement and a civil war.

At least 21 people have been killed Thursday, the opposition Local Coordination Committees of Syria said.

Photo: A Syrian rebel fighter is treated at a hospital in the northern Syria city of Aleppo