West aims to isolate, quarantine Syria, not liberate it 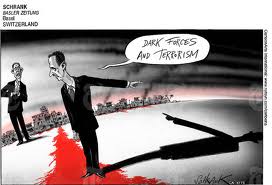 The aim of the international community now is not to liberate Syria but to isolate it and quarantine the contagion, according to the Guardian’s Simon Tisdall.

“The fact that the US and Britain have looked on as a second UN peace mission by Lakhdar Brahimi runs into the sand (the first, led by Kofi Annan, collapsed last year), the fact that no substantive pressure has been put on Russia’s Vladimir Putin to drop his Syrian diplomatic protection racket, the fact that military intervention is publicly and noisily ruled out and the fact that no concerted international humanitarian relief effort has been mounted to assist Syrian refugees in Turkey, Lebanon and Jordan all point to one conclusion: that the west is not serious about enforcing Assad’s demise. It is a message that Assad has undoubtedly heard.”

Tisdall added in his article ” Why Assad may yet claim victory” :

“Israel’s decision to build border defences across the Golan and Turkey’s deployment of Patriot missiles along its border symbolise this shifting reality. The aim now is not to liberate Syria but to isolate it and quarantine it and to contain the contagion.

It is time the likes of ( President Barack ) Obama and ( Prime Minister ) William Hague admitted this reality and started dealing with what is, rather than what might have been, Tisdall concluded.