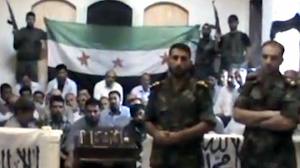 Syrian rebels freed 48 Iranian hostages on Wednesday in exchange for the release of more than 2,000 civilian prisoners held by the Syrian government, the head of a Turkish aid agency which helped broker the deal said.

The Syrian rebel al-Baraa brigade seized the Iranians in early August and initially threatened to kill them, saying they were members of Iran’s elite Islamic Revolutionary Guard Corps sent to fight for Syrian President Bashar al-Assad.

The Islamic Republic, one of Assad’s closest allies, denied this, saying they were Shi’ite Muslim pilgrims visiting shrines, and it asked Turkey and Qatar to use their connections with Syrian insurgents to help secure their release.

“The 48 Iranians have been released and are being taken to Damascus, accompanied by Iranian and Syrian officials,” Bulent Yildirim, head of humanitarian aid agency IHH, told Reuters by telephone from Damascus.

He said the release of 2,130 civilian prisoners, most of them Syrian but also including Turks and other foreign citizens, had begun in return. Two state-run Iranian television channels also reported that 48 Iranians had been freed in a swap.

There was no confirmation from the Syrian government, which has periodically freed hundreds of prisoners over the 21-month-old conflict in apparent concessions. But Damascus has always stressed such prisoners “do not have blood on their hands.”

Syrian government forces have struck local deals with rebel groups to trade prisoners but the release announced on Wednesday would be the first time non-Syrians were freed in a swap.

Opposition groups accuse Assad of detaining tens of thousands of political prisoners during his 12 years in office and say those numbers have spiked sharply during the civil war.

Turkey is one of Assad’s fiercest critics, a strong opposition backer and proponent of international intervention. It has been highly critical of Iran’s stance during the Syrian uprising, which has killed around 60,000 people according to a U.N. estimate.

A pro-government newspaper said on December 31 that Syrian forces arrested four Turkish fighter pilots who were trying to sneak into a military airport with an armed group in the northern province of Aleppo.

State-run media did not mention the reported incident.

The al-Baraa brigade, part of the umbrella rebel organization, the Free Syrian Army, said in October it would start killing the Iranians unless Assad freed Syrian opposition detainees and stopped shelling civilian areas.

But Qatar, following a request from Iran, urged the rebels not to carry out the threat.

Insurgents fighting to topple Assad accuse Iran of sending fighters from the Revolutionary Guards to help his forces crush the revolt, a charge the Islamic Republic denies.

The rebels now control wide areas of northern and eastern Syria, most of its border crossings with Turkey and a crescent of suburbs around the capital Damascus. But Assad’s government is still firmly entrenched in the capital and controls most of the densely populated southwest, the Mediterranean coast and the main north-south highway.

The IHH has been involved in previous negotiations in recent months to release prisoners, including two Turkish journalists and Syrian citizens, held in Syria.

The humanitarian group came to prominence in May 2010 when Israeli marines stormed its Mavi Marmara aid ship to enforce a naval blockade of the Palestinian-run Gaza Strip and killed nine Turks in clashes with activists on board.