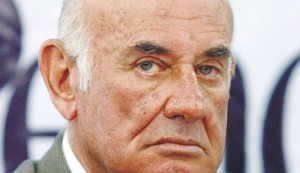 Isareli newspaper Haaretz quoted Yesh Atid candidate and former Shin Bet chief Jacob Perry as saying Israel faces the prospect of a new Palestinian uprising because of despair over the gridlock in peacemaking.

Perry told Reuters in an interview that the next government must make peace negotiations with the Palestinians its foreign policy priority.

“Israel must do everything to come back to the negotiating table and find a compromise,” he said, criticizing other leaders from across the political spectrum for playing down the issue.

The military has reported growing violence across the West Bank in recent weeks, prompting warnings of a possible intifada after years of relative calm Haaretz reported

“Are we on the edge of a third intifada? It is a real possibility because of the amount of despair coupled with the [political] stalemate,” said Perry, who took over the Shin Bet shortly after the first intifada broke out in December 1987.

Perry warned that fundamentalist Islamist groups would seize the initiative if there was no peace initiative. He added that another Palestinian revolt need not be violent, but could evolve into a mass protest movement.

Netanyahu has made security the focus of his election campaign, pledging to continue a settlement expansion program that has drawn international criticism.

While he looks certain to win re-election, his electoral support has been eroded by the rising prominence of Habayit Hayehudi, led by Naftali Bennett, a former Netanyahu aide and settler leader who wants to annex 60 percent of the West Bank, according to Haaretz.

The First Intifada (also known as simply the “intifada” or intifadah was a wave of Palestinian uprising against Israel, which lasted from December 1987 to 1993. The intifada began in the Jabalia refugee camp and quickly spread throughout Gaza, the West Bank and East Jerusalem.

The Second Intifada, also known as the Al-Aqsa Intifada and the Oslo War, was the second Palestinian uprising – a period of intensified Palestinian–Israeli violence, which began in late September 2000 and ended around 2005. The death toll, including both military and civilian, is estimated to be over 3,000 Palestinians and around 1,000 Israelis (Jews and Arabs), as well as 64 foreigners.