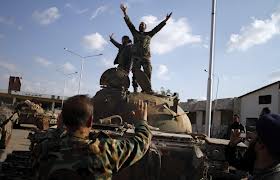 Opposition fighters are celebrating success in Syria’s north but enduring cruel squalor in and around Damascus, where government forces are cutting off food and medical supplies, a rebel leader said Saturday.

They have taken control of 70% of the heliport, rebel leader Capt. Islam Aloush said from Damascus. Militia members killed the head of the base, he said. “There are still about 30 snipers and a few dozen regime forces, but the fight is closing in on them.”

Al-Assad’s forces use the base mainly to launch copter attacks on nearby towns. Syrian warplanes dropped cluster bombs on Taftanaz in a raid that led to the destruction of several buildings, the opposition Local Coordination Committees of Syria said Saturday.

Since the push on Taftanaz began, they have exacted retribution on the nearby city of Binnish, where amateur video posted on the Internet has shown dozens of smoke plumes marking where ordnance has struck.

“The trouble with Idlib is that it has many military airports.” Aloush said his Liwaa Islam militia and other groups want to knock the bases “to minimize the reach of the regime’s warplanes.”

Opposition and government sources have reported that the extremist al-Nusra Front, which the United States has designated as a terrorist group, was taking part in the assault on Taftanaz.

As al-Assad has lost some ground in the far north, he has tried to maintain the reach of his firepower by launching long-range Scud missiles at towns near Turkey’s border.

U.S. troops began arriving on Friday to operate Patriot missile defense batteries, deployed to intercept any Scuds that might cross into Turkey from Syria.

Farther south in the Damascus suburbs, government forces have been cutting off food and, in particular, medical supplies for weeks.

“They have sometimes resorted to field executions when they find people smuggling in syringes and other basic medical items,” Aloush said.

Rebels are very dependent on food and medical supply lines because they have to treat the wounded in safe locations inside the country. It is too difficult to evacuate them out of the country, he said.

Government forces target bakeries, reducing food supplies, he said. Ammunition and money are dwindling. “When we are not taking over regime military posts, we are not getting enough ammo to fight the security forces,” he said.

Other opposition groups have also reported the government ratcheting up the battle in the capital.

In Daraya, south of Damascus, 1,000 of Aloush’s men and other revolutionaries are holding out against a weeks-long offensive by the government, which wants to take the town back.

As bodies litter battle zones by a hundred or more daily, Syria’s opposition still feels deserted by the international community.

In an open letter Friday Ahmed Moaz al-Khatib, head of the National Coalition of Syrian Revolutionary and Opposition Forces, implored the U.N. Security Council and world leaders to take action.

“Our people are subjected to genocide and our country is being destroyed as the international silence is only encouraging the regime to commit more crimes against humanity,” he wrote. “Halting massacres in Syria is an international obligation everyone should bear responsibility for.”

The overall death toll in Syria has surpassed 60,000 people, the United Nations says. At least 25 people have been killed in Syria on Saturday, the LCC said.