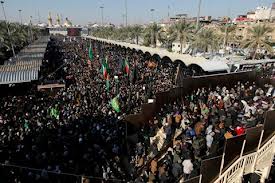 A car bomb killed 17 worshippers south of Baghdad on Thursday as pilgrims from around the world thronged Iraq’s shrine city of Karbala to finish commemorations for a revered figure in Shiite Islam.

The attack came despite a massive security operation mounted to safeguard the millions of Shiite Muslims travelling to and from Karbala for the conclusion of Arbaeen mourning rituals.

No group immediately claimed responsibility for the attack in a car park in the town of Musayyib used mainly for vehicles transporting pilgrims, but Sunni militants often try to target Shiites during commemoration rituals in a bid to incite sectarian bloodshed.

The 5:00 pm (1400 GMT) blast killed 17 people and wounded 47, a police officer and a doctor said, the second deadly attack in recent days in Musayyib, which lies about half way along the main route linking Baghdad and Karbala.

Seven people were killed in Musayyib on December 31, apparently because they were Shiites.

Among the dead in Thursday’s attack were five women and four children, the medic said, adding that the toll could rise because many of the wounded were badly hurt.

The threat of attack had spurred authorities to deploy 35,000 soldiers and police to Karbala, including 2,500 policewomen, in the run-up to and the climax of Arbaeen.

Huge crowds flooded the city’s streets as sad songs blared from loudspeakers and black flags flew alongside pictures of Imam Hussein and his half-brother Imam Abbas, revered figures in Shiite Islam who are buried in Karbala.

Provincial governor Amal al-Din al-Har said some 18 million pilgrims passed through Karbala, 110 kilometres (70 miles) south of Baghdad, by the end of the commemorations on Thursday afternoon, many walking for days from across Iraq.

Among the worshippers were around 750,000 from 30 different countries, leaving all of the city’s 700 hotels with 100 percent occupancy, the governor said.

Arbaeen marks 40 days after the Ashura anniversary commemorating the killing of Imam Hussein by the armies of the caliph Yazid in 680 AD.

“We are defying terrorism, and we are following the example of Karbala in sacrifice and redemption,” said Mohammed Swadi, 40, adding that he had walked for 12 days from the southern port city of Basra for the occasion.

“This is not much when it comes to expressing our love for Imam Hussein.”

Another pilgrim said she had walked for three days from the central city of Hilla to attend Arbaeen in Karbala, to pray for a medical cure.

“I have a skin disease that doctors could not treat, and I vowed to attend the pilgrimage walking on foot and ask Allah with the name of Hussein to cure me,” said the 35-year-old who gave her name as Umm Ali, or mother of Ali.

The seventh century battle near Karbala is at the heart of the historical division between Islam’s Sunni and Shiite sects, a split that fuelled sectarian violence between the majority Shiite and minority Sunni communities after the US-led invasion of 2003.

Shiites make up around 15 percent of Muslims worldwide. They are the majority population in Iraq, Iran and Bahrain and form significant communities in Afghanistan, Lebanon, Pakistan, India and Saudi Arabia.