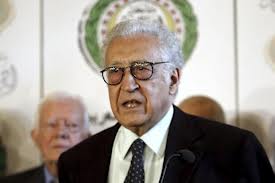 The stench of the burnt bodies was so potent, Abu Jafar said, he could smell it from 2 kilometers away.

“It smells awful because the regime appears to have burnt so many bodies recently,” the opposition activist said Sunday from the beleaguered city of Homs.

“Some cars arrived this morning and carried away dead bodies. We are not sure where.”

Jafar’s account comes a day after what may be the deadliest day yet in Syria’s 21-month civil war, according to opposition figures.

“The pace is increasing,” he said.

“A solution is still possible, but it is only getting more complicated every day,” Brahimi added. “Had we dealt more carefully with this conflict in 2011, it would have been much easier to resolve it. There is no question that it is much harder today.”

On Saturday, Brahimi met with Russian Foreign Minister Sergey Lavrov. Russia and China have used their veto power in the U.N. Security Council to block some of the toughest resolutions proposed against the Syrian regime.

Traveling heavily in hopes of brokering a halt to the war, Brahimisaid last week he is pinning his hopes on the formation of a transitional government in Damascus that would hold power until an election.

At least 397 people were killed across the country Saturday, the opposition Local Coordination Committees of Syria said. More than 50 deaths were reported Sunday, including six children.

The LCC said Saturday’s death toll included more than 200 people who were captured and “field executed” by Syrian soldiers in the Homs suburb of Deir Baalbeh after Syrian forces won a battle there.

The group’s representative in Deir Baalbeh said he could only personally account for 27 deaths, but said a Syrian soldier who had been captured by rebels said government forces killed at least 200 people in the suburb.

The group posted video of several men’s bodies lined up in a grassy field with wounds to the head, in what it claimed was footage taken by witnesses.

Jafar said he believes Deir Baalbeh was targeted “because it is the main gate to reach the Khaldiya neighborhood, which has been under the control of the rebels.”

Syrian state-run TV confirmed there was conflict in the area but said that government forces had been chasing down “terrorists.” News footage showed bodies that appeared to have been dragged across the floor in a building, leaving long trails of blood behind.

But another opposition activist in Homs, Hadi Abdallah, said the situation in nearby Deir Baalbeh “is only turning from bad to worse.”

“Smoke is rising from Deir Baalbeh this morning, and a stench is coming out of some of its streets due to the burning of some corpses by the regime forces,” Abdallah said Sunday.

Syria’s state-run news agency SANA said Sunday that the military has been killing many terrorists.

One army unit “killed several terrorists and injured many others” and destroyed launchers of locally made missiles that the terrorists had used to attack orchards in the Maartamasrin area in Idlib province, SANA reported.

CNN cannot independently confirm casualty and other reports as Syria’s government has severely restricted access to the country.