Syria Once Again Launching Scuds at Rebels, says US 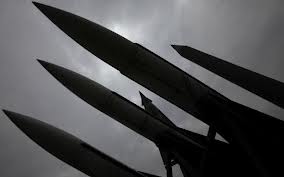 Within the past day, the Assad regime in Syria once again launched Scud ( ballistic) missiles at rebel-held areas in the northwest part of the country, U.S. officials said.

Last week, officials said the Syrian regime fired five missiles from the Damascus area into an area west of the northern city of Aleppo, near the border with Turkey. The move was seen as an escalation of the nearly two-year conflict in Syria.

The latest missile salvos once again targeted the area near Aleppo, according to a U.S. official. Military forces loyal to Syrian President Bashar al Assad launched between four and six of the medium-range missiles from the Damascus area towards targets outside of the northern city, the official said.

The missiles were launched in multiple waves and did not carry chemical weapons, another U.S. official said.

A Defense Department spokesman would not confirm directly that there had been new Scud launches on Thursday, but added, “We have noted the Syrian regime’s use of Scud missiles in the conflict and that continues.”

The Associated Press was first to report that Syria was once again using Scud missiles against rebel targets.