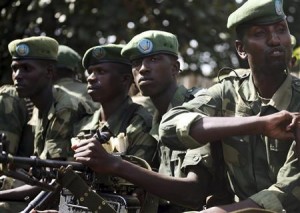 The U.N. mission in the Democratic Republic of Congo found that 126 rapes were committed in an eastern town after Congolese troops fled there last month as rebels advanced on the provincial capital of Goma, the United Nations said on Tuesday.

Congolese troops, aided by a U.N. peacekeepers have been battling the so-called M23 rebels – who U.N. experts and Congolese officials say are backed by neighbouring Rwanda – for the past eight months in the resource-rich east of the country.

Congolese troops retreated to the nearby town of Minova when the rebels captured Goma on November 20. Kinshasa regained control of Goma almost two weeks later when the rebels withdrew, but the United Nations said the situation remains “tense and fragile.”

The U.N. mission, known at MONUSCO, was investigating alleged human rights abuses in and around Minova from November 20 to November 30 and this month interviewed more than 200 people in the area, said U.N. spokesman Martin Nesirky.

“According to preliminary findings the U.N. mission has documented at least 126 cases of rape. The teams were also able to confirm the killings of two civilians, including one minor,” Nesirky told reporters.

The United Nations was working with the Congolese government to establish which army units the men belonged to so the world body could review any support provided to those units, Nesirky said.

MONUSCO has more than 17,000 troops in the Congo – a nation the size of Western Europe – and even before the M23 rebellion, the peacekeepers were stretched thin and the U.N. force was struggling to fulfil its mandate of protecting civilians.

The U.N. mission is also helping the Democratic Republic of Congo combat fugitive Ugandan warlord Joseph Kony and his Lord’s Resistance Army. U.N. Secretary-General Ban Ki-moon said in a report on Tuesday that here had been 180 attacks presumed to have been carried out by Kony’s LRA guerrillas this year.

Ban said 138 of those attacks were in the Congo and 42 in neighbouring Central African Republic.

“They resulted in the deaths of 39 civilians,” Ban said. “A total of 193 persons have been abducted, 84 from the Central African Republic and 109 from the Democratic Republic of Congo. One third of the abductees were children.”

Kony, who has been accused of terrorizing northern Uganda for 20 years, is wanted by the International Criminal Court for war crimes. His guerrillas are accused of abducting children to use as fighters and sex slaves, and of hacking off victims’ limbs as a method of intimidation and revenge.

In June, the U.N. Security Council called for global help to equip an African Union force hunting Kony’s forces, which lack basic resources such as boots, food, transport and training.

“I am encouraged by the progress made in tackling the threat and impact of (the) LRA,” said Ban. “I urge the international community to maintain its attention to the LRA issue and to provide the financial support needed by the African Union and the United Nations to continue their work.”

Violence by the Lords Resistance Army has subsided since 2005 when it was ejected from Uganda. Kony is now thought to command only hundreds of followers scattered in jungle hideouts.

Kony’s profile rose after a celebrity-backed campaign against him earlier this year and a video was posted on YouTube by a California filmmaker and promoted on Twitter with the hashtag #Kony2012.