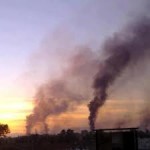 A mosque in the Palestinian refugee camp of Yarmouk in southern Damascus that was sheltering some 600 refugees from neighbouring districts has been attacked from the air and hit by at least one rocket, and there are reports of many casualties.

Yarmouk is a stronghold of the pro-Assad Popular Front for the Liberation of Palestine, which has been fighting the rebels, who have themselves had many Palestinians fighting alongside them.

Yesterday it was reported the PFLP military commander Ahmed Jibril had fled the camp with his son for Tartous, a stronghold of Bashar al-Assad’s Alawite minority.

Palestinian President Mahmoud Abbas called on Sunday for an “immediate halt” to the shelling of the Palestinian camps in Damascus after an air strikes on the Yarmouk Refugee camp in Damascus reportedly killed at least 20 civilians.

“We call on the warring sides in Syria to spare the Palestinian people and their camps in Syria,” he said in a statement carried by official Palestinian news agency WAFA, adding that bombing of the refugee camps “must be stopped immediately.”

“We also call on the international community to take immediate action to provide protection to our people in Syria,” Abbas said, adding that the Palestinians were “not involved” in the conflict.

Sunday’s air strikes on Yarmouk were the first against Palestinian refugee camps in Syria, which have long been strongholds of militant groups closely allied with Damascus.

Yarmouk is home to more than 112,000 Palestinians. According to the United Nations Relief and Works Agency (UNRWA), there are about 486,000 Palestine refugees living in nine official and three unofficial camps across Syria.

Hamas member Izzat al-Rishak slammed the Syrian Air Force for the bombing of the Palestinian refugee camp of Yarmouk in Damascus.

Hamas is a former ally of the Syrian regime