Hezbollah’s Nasrallah: The rebels can’t win the war in Syria 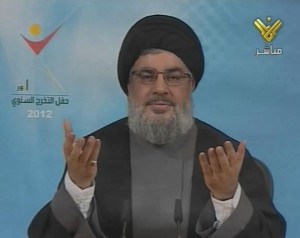 Hezbollah chief Sayyed Hassan Nasrallah said on Sunday during a student graduation ceremony that there is no way the rebels in Syria could win the war against President Bashar al-Assad.

“If you are betting that the regime will fall in Syria, all your information is wrong. Do not build your information on wrong assumptions,” Hezbollah chief who is a staunch ally of Assad said, adding : “The situation in Syria is getting more complicated (but) anyone who thinks the armed opposition can win is very very very mistaken.”

Addressing the March 14 alliance which supports the Syrian uprising he said:

“I want to tell March 14 that the United States wants the Syrian crisis to continue so that more people die and so that Syria will be deleted from the regional equation.”

He added: “”The events in Syria have been ongoing for almost two years. Every time they say the Syrian regime will fall in two months, they keep adding to these two months. Now it’s been almost two years and the regime is still standing.”

Nasrallah added: “The syrian regime is defending what it believes in”

The Syrian rebels have been accusing Hezbollah of sending fighters to neighbouring Syria to help Assad overcome the largely Sunni Muslim revolt. Hezbollah denies these accusations despite the fact that many members were killed in Syria and were buried in Lebanon.

The Syrian uprising started as peaceful demonstrations calling for greater freedoms but turned into an armed insurgency largely in response to heavy crackdown and attacks by the Assad forces.

The uprising pits majority Sunnis against Assad’s Alawite sect, an offshoot of Shiite Islam. With Sunni-Shi’ite sectarian tensions smouldering in the region, Syria’s conflict has drawn Sunni radicals from elsewhere into rebel ranks.

Addressing the situation in Lebanon he accused March 14 alliance of boycotting the government activities with aim of forcing a parliamentary election under the 1960 electoral law.

“The goal of the boycott has become clear, the other party ( March 14) wants us to come to a point where we are forced to adopt the 1960 electoral law,” Nasrallah said , adding: “I advise them to reconsider their boycott and I call on them to join a dialogue to discuss the electoral law and hold the elections and form a new government.”

“They said in 2006 that we did not achieve victory against Israel. They were the ones who made a mistake.” He said adding “Israel has been training and preparing ever since, and now in the war against Gaza it turned out that the Israeli army is a failure.”