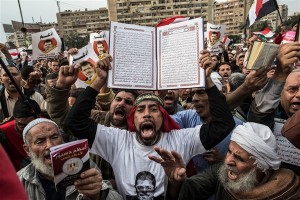 Egyptians voted narrowly in favor of a constitution shaped by Islamists and opposed by liberals in the first round of a two-stage vote, a member of the Muslim Brotherhood’s party that sought a “yes” vote said on Sunday, citing its unofficial tally.

One opposition official also said the vote appeared to have gone in favor of Islamists who backed the constitution, after the opposition had said late on Saturday when voting ended that their exit polls indicated the “no” camp would win.

Liberal-minded opponents of President Mohamed Mursi, who had fast-tracked the constitution through an Islamist-dominated drafting assembly, said the basic law would divide the nation as it did not respresent the aspirations of all Egyptians.

“The referendum was 56.5 percent for the ‘yes’ vote,” a senior official in the Brotherhood’s Freedom and Justice Party operations room set up to monitor voting told Reuters.

The Brotherhood and its party, which propelled Mursi to power in June, had representatives at almost all polling stations across the 10 areas, including Cairo, where this round of voting was held.

The party official, who asked not to be identified, said the tally was based on counts from more than 99 percent of polling stations in this round.

The second round vote in remaining areas of the country is next Saturday. Official results are not expected until after that stage is complete.

“I think we lost,” the opposition official, who also asked not to be named, told Reuters, saying a strong “yes” vote in Alexandria, Egypt’s second city, had surprised them and seemed to have tipped the balance for Islamists.

The opposition had initially said it expected the “no” vote to prevail shortly after polling stations closed. But as counting proceeded, another opposition official monitoring the vote, Yahya Arafat of the Popular Current movement, had told Reuters the vote was “very close” and could go either way.

Photo: A man holds up a Quran as supporters of Egyptian President Mohammed Mursi and members of the Muslim Brotherhood chant slogans during a rally on Friday in Cairo, Egypt. Liberal-minded opponents of President Mohamed Mursi, who had fast-tracked the constitution through an Islamist-dominated drafting assembly, said the basic law would divide the nation as it did not respresent the aspirations of all Egyptians.