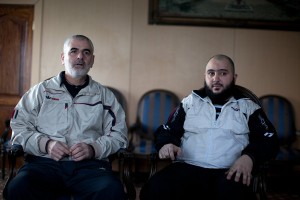 The rebel commander holding a group of Lebanese hostages in Syria’s northern countryside for almost seven months has offered to release the men in a prisoner exchange.

Amar al-Dadikhi, commander of the North Storm brigade, one of many fighting groups seeking the overthrow of President Bashar al-Assad, said in interviews that he would free the nine remaining hostages if the Syrian government released two prominent opposition figures and if Lebanon freed all Syrian activists in government custody.

The detention of the hostages began in May after the Lebanese men were removed from buses driving though Syria while returning from a Shiite religious pilgrimage to Iran. Their capture inflamed regional tensions and remained stubbornly unresolved as the violence in Syria intensified throughout the year.

It caused a cascade of fallout: riots at the Beirut airport, retaliation against Syrians in Lebanon and a deepening of the sectarian character of the war.

It also sullied the reputation of the Free Syrian Army, as the loosely organized antigovernment fighting groups are called. The fighters seek international recognition and tangible military aid, two desires undermined by the long-running and high-profile hostage case.

Mr. Dadikhi accuses the hostages of being members of Hezbollah, the Shiite militant group that is supported by Iran and Syria — an allegation that the hostages and their families deny.

The Free Syrian Army’s leadership appears not to have taken an active role in the case, or to have been able to convince Mr. Dadikhi to release the men. The rebel commander claims to have 1,300 armed fighters and a network of cross-border contacts from his career as an importer.

Col. Abdul Jabbar al-Okaidi, a former Syrian military officer and one of the Free Syrian Army commanders for the Aleppo region, declined to comment on the case beyond saying he is aware of the demands of Mr. Dadikhi, whom he called Abu Ibrahim.

“Abu Ibrahim has his requests,” he said. “If they are taken care of, he will free the Lebanese.”

Mr. Dadikhi allowed two journalists from The New York Times to meet with two of the hostages — identified as Ali Abass, 30, and Ali Tormos, 54 — for about 30 minutes on Thursday afternoon. The men appeared to be in good health, and said they and the other hostages had not been harmed.

They expressed weariness and asked that Lebanon and Syria meet their captors’ demands. “It has been a long time and we want to go home,” Mr. Abass said.

The interview was held in a former government office at the border crossing from Syria to Kilis, Turkey. Mr. Dadikhi agreed to leave the room while the hostages spoke.

The meeting nonetheless remained all but scripted.

Mr. Tormos, wearing what appeared to be a new track suit, called for the removal of the Assad government. In behavior common to hostages seeking good relations with their captors, he and Mr. Abass praised Mr. Dadikhi and described their living conditions in unequivocally cheerful terms.

At one point, Mr. Tormos pointed to Mr. Abass and said, “He has gained weight. I have seen it.”

He added, “I talk to you honestly and openly, as God is my witness: No one has bothered us or hurt us or told us bad words.”

Mr. Abass then said that they had ample food, medicine, heat and access to a television — conditions that many people in Syria do not have as the conflict enters its second winter.

Mr. Dadikhi’s demands were carefully pitched to the message of the revolution, and he insisted that he wanted no money as part of a ransom deal. The prospects for Syria and Lebanon to accept Mr. Dadikhi’s conditions were nonetheless uncertain.

The two opposition figures whose release he has sought by name — Tal al-Mallouhi and Lt. Col. Hussein Harmoush — have not been heard from during the entire period of the hostages’ detention. They are feared by many Syrian opposition activists to be dead.

Ms. Mallouhi, a teenage blogger at the time of her arrest, had no direct participation in the uprising. Her blog had expressed support for Palestinians and called for a better life in Syria. She was seized by Syrian security officers in late 2009 — the Syrian uprising began in March 2011 — and later jailed for spying.

At the time, the Arabic Network for Human Rights Information called her “the youngest prisoner of conscience in the Arab world.” As mass protests broke out against the Assad government, the opposition adopted her as a revolutionary symbol and example of government repression.

Colonel Harmoush, the first prominent defector from the Syrian Army, fled Syria in June 2011 and claimed the government had ordered the army to fire on civilians.

He disappeared from Turkey in late August 2011 and soon appeared on Syrian state television to recant his antigovernment statements, in what the opposition called a coerced appearance that followed his abduction from Turkish soil.

Mr. Dadikhi acknowledged that Ms. Mallouhi and Colonel Harmoush may be dead, and said if the government has killed them he would not retaliate. “We will not do the same as the regime and kill our prisoners,” he said. “We want a political solution.”

Mr. Dadikhi, who accused Lebanon of being a puppet of the Assad government, also demanded that Lebanon release any anti-Assad activists it has arrested since the uprising began. He said he did not have a precise count of the number of activists in Lebanese custody, but suggested the number could be up to 100.

He added that he had tried to contact the American Embassy in Turkey to broker the hostages’ release and that he might be willing to turn over the men to American diplomats but that he had received no reply.

The Lebanese hostages were captured on May 22 by another contingent of antigovernment fighters, Mr. Dadikhi said, as Syria’s army was losing control of territory north of Aleppo.

Two buses they were traveling in were passing through Syria toward Lebanon after their passengers had visited holy sites in Iran. The buses, holding more than 100 people, were stopped at a rebel checkpoint and 11 men were removed and detained; more than 90 woman and children were released.